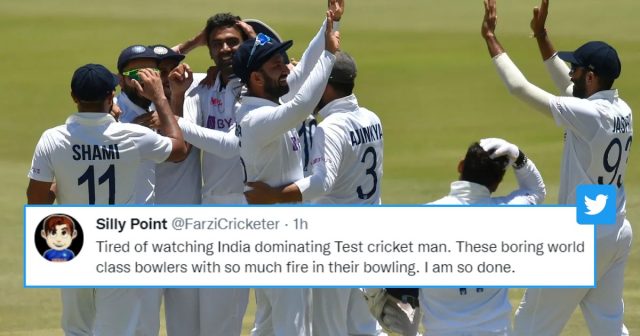 India became the first Asian team to win a Test match at Centurion as they beat the hosts South Africa by 113 runs on the final day of the first Test. In the process, they gained a 1-0 lead in the series. India needed six wickets to win when the day started as opposed to 211 runs for South Africa.

India wrapped up the South African innings inside a session and a half. This happened after there were reports of inclement weather affecting the outcome of the game on day 5. Dean Elgar (77) started the day with Temba Bavuma (35*) as they had a 36-run stand. However, Jasprit Bumrah broke through for India and opened the floodgates for India.

The rest of the wickets fell in quick succession with Ravichandran Ashwin cleaning up the tail. The Indian bowlers in Mohammed Shami and Jasprit Bumrah built on the good work set up by KL Rahul and others. Mohammed Siraj and Shardul Thakur played their part in the process as well. Shami ended with match figures of 8/107.

This is how Twitter reacted to India’s success. The Centurion win was their fifth overall in South African conditions. Overall in 2021, India have won at Brisbane, Lord’s The Oval and at Centurion, reinforcing their domination in Test cricket.

What a superb win this is! @ashwinravi99 finishes things in style! 1-0 India. Gabba breached. Centurion Breached. Best ever year for India in Test cricket! Perhaps yes.

Starting the year at the Gabba and finishing it thus at Centurion is a mighty achievement. The WTC final was the only aberration in a great year of test cricket

Centurion Conquered. In 3.5 days. Let’s convert this start into the first ever Test series win in South Africa. 👏👏 #SAvInd

Centurion Conquered. In 3.5 days. Let’s convert this start into the first ever Test series win in South Africa. 👏👏 #SAvInd

Rahul Dravid has now won a Test in South Africa as captain (2006) and coach (2021) 👏#SAvIND pic.twitter.com/rYZWqIyVoV

KL Rahul and his 117-run opening wicket stand with Mayank stands out. That was the difference between the two teams. And not to mention how well Shami and Bumrah were #INDvSA

Started the year with Gabba and ending it with Centurion!
Congratulations for the historic Test win #TeamIndia.
What a brilliant performance to beat the hosts in such a grand manner! 🙌#SAvIND pic.twitter.com/ymnAbwtPJ6

This has to be one of the finest eras in Indian Test bowling.

Someone give Daniel Alexander a hug.

Fortress Gabba. Fortress Centurion. Will it be Fortress Edgbaston next ?#TeamIndia

A big victory for #TeamIndia in the 1st Test.

The fortress has been breached!

Tired of watching India dominating Test cricket man. These boring world class bowlers with so much fire in their bowling. I am so done.

Indian skipper Virat Kohli and his deputy KL Rahul had a special word for all the bowlers and especially for Mohammed Shami who took the limelight in this game.

“Got off to the perfect start. Have to understand one day was washed out – shows how well we played. It’s always a difficult place to play against SA (Centurion). The discipline that the batters showed. Winning the toss, batting first overseas is a tough challenge. Credit to Mayank and KL the way they set it up. We knew we were in pole position with anything over 300-320. Knew the bowlers will do the job. Spoke about it in the change room – the fact he didn’t bowl much in the first innings, it allowed SA to get around 40 more runs (Bumrah). Just the way these guys bowl together has been a hallmark of our team getting a result in difficult situations” said an elated Virat Kohli at the presentation ceremony.