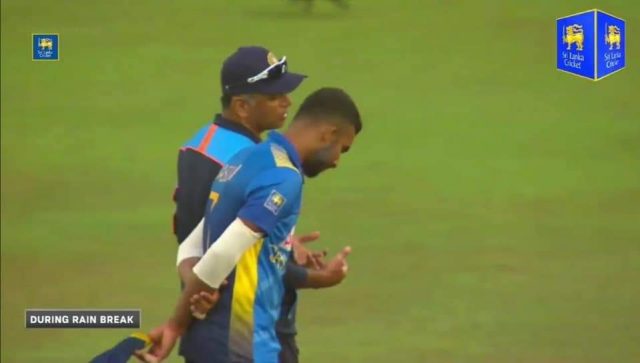 The 3rd ODI between India and Sri Lanka at the R Premadasa Stadium in Colombo witnessed a heart-melting turn of events when India head coach Rahul Dravid was seen having a close chat with Sri Lanka skipper Dasun Shanaka during the rain break.

With rain playing a spoilsport during India’s batting, Dravid had a long chat with Shanaka, who is serving his first assignment as Sri Lanka captain. The image holds a greater significance after a clip of Sri Lanka head coach Mickey Arthur and Dasun Shanaka were seen going at each other after the 2nd ODI defeat.

The buzz was about what Rahul Dravid said to the young Sri Lankan captain. In the latest turn of events, Shanaka opened up on what Dravid told him. It has been reported that Dravid praised him for his captaincy and stated that everyone’s effort in the Lanka team has been praiseworthy. Dravid also stated that the way Lankans improved in the series was commendable after their recent dismal form.

“You are leading the side very well. The entire team is praiseworthy,” Rahul told Shanaka as per a report in themorning.lk.

“Dravid had told Shanaka that India had been ‘surprised’ by the much-improved Sri Lanka side while also conceding that they were outplayed on Tuesday in the second ODI, which Sri Lanka lost after a close fight,” the report further added.

India look to seal the T20I on Tuesday

After a convincing win in the 1st T20I, the Men in Blue will look to continue their winning run when they lock horns with Sri Lanka in the 2nd T20I of the series on July 27 (Tuesday) in Colombo.

The Rahul Dravid-led coaching staff might make a few changes in the playing XI to try out a few more players ahead of the T20 World Cup.