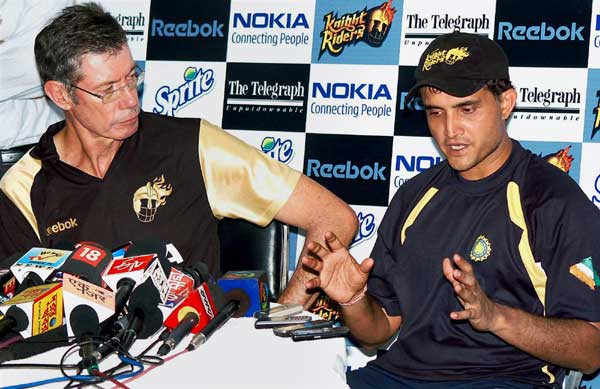 Former India captain Sourav Ganguly hasn’t enjoyed the best relationship with foreign coaches. Whether we talk about former Greg Chappell or John Buchanan, Ganguly hasn’t been on the best of the best terms with them.

Back in 2006-2007, when Greg Chappel became India’s coach, Ganguly had to step down from captaincy. After his tenure, Rahul Dravid took over as the captain of the team.

Similarly, during Sourav Ganguly’s time with the Kolkata Knight Riders, things didn’t particularly go well between him and then Kolkata Knight Riders coach John Buchanan. The rift between the two resulted in Brendon McCullum replacing Ganguly as Kolkata’s captain in 2009.

Ganguly Lacked The Skills To Lead In T20s – John Buchanan

Recently John Buchanan spoke to Sportstar, where he accused Ganguly of not being a good T20 player nor was he a captaincy material for the KKR franchise. John said Ganguly lacked the required captaincy skills in the T20 format. For him, he wasn’t a quick decision-maker and was never suitable for T20 captaincy.

“My thinking at the time was, as a captain, you needed to be able to make quick decisions and your game needed to be suited to the shorter format, and that’s why I had those conversations with Sourav. I just couldn’t believe he was suited to the format of the game and certainly not in a formal captaincy role,” Buchanan stated.

Meanwhile, in 2009, John Buchanan had come up with a unique captaincy tactic of having three captains in one game. That particular tactic didn’t go well with Sourav Ganguly which ultimately led to the start of the rift. John justified his three captain theory which he tried to implement in the KKR setup back then.

“I think it’s too much for one person to actually understand all the set of plays that you need to put in place, all the various decisions you need to make, reasonably quickly. And really where it was going to was to have everybody as a leader. In other words, you are saying split captaincy, but you want everybody to be a leader on the field.

Meanwhile, Sourav Ganguly was part of the KKR franchise between 2008-2010. He then moved to Pune Warriors India for a couple of years. As of today, Ganguly is the President of the Board of Control for Cricket in India.