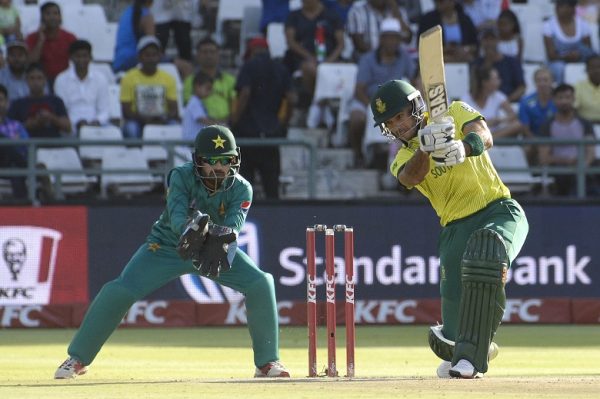 The four-match T20I series between Pakistan and South Africa is now level at one apiece thanks to a smooth fifty from Aiden Markram that made it look like an easy chase. They did it with 36 balls to spare and 6 wickets in hand while chasing 141 runs at the Wanderers in Johannesburg.

South African all-rounder George Linde ran through the Pakistan batting lineup and picked up their first three wickets and helped them restrict Pakistan to just 140. He also scored a quickfire 20 of 10 balls and took South Africa over the line. Tabraiz Shamshi also bowled superbly conceding at an economy rate of less than 6.

Babar Azam top-scored for the visitors with a half-century. Babar Azam and Mohammad Hafeez had a decent partnership but it just wasn’t enough to help Pakistan get a huge score.

Aiden Markram started off his innings really well along with opener Janneman Malan. Those two added 44 of just 27 deliveries. South Africa suddenly seemed to have lost the plot in the middle overs after they lost 4 quick wickets scoring just 48 runs. Even after losing wickets quickly Heinrich Klaasen and George Linde made sure South Africa sailed through without any more hiccups.

South Africa ended Mohammad Rizwan’s streak of 10 consecutive 40+ scores, one of them being a century. Mohammad Rizwan was dismissed for a golden duck today that ended the streak which was getting impossible to break as days were passing by.

Magala started with two front-foot no-balls, followed by a high full-toss, and a wide yorker. His fifth delivery was another wide yorker, but legal, and Haider Ali hit it over short third-man for four. Magala’s next ball went for two through midwicket, before a wide down the leg side. His next three were all full on the stumps and Azam hit the last of them through the third man for four before another wide, down the leg. Magala’s over ended on its 12th ball when Azam couldn’t get him away on the offside. In total, the over cost 18 runs.

South Africa and Pakistan lock horns again on April 14th at the SuperSport Park in Centurion. Both teams will be eager to win as the series is on the line.