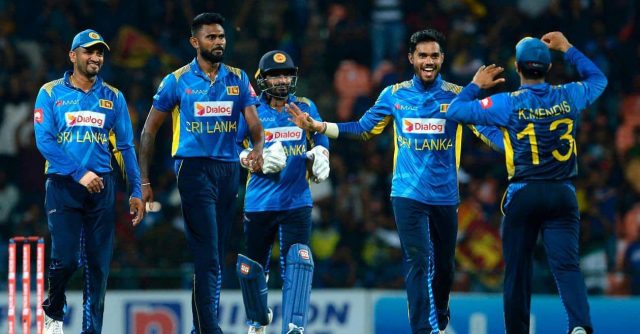 Sri Lanka has been fined for maintaining a slow over-rate in the 2nd One Day International (ODI) against India. As a result, they were penalized one point from their World Cup Super League tally.

The news comes as an insult to injury after Dasun Shanaka-led Sri Lanka couldn’t close out the game against India. They were in a commanding position during India’s chase but let it slip away at a crucial juncture. Eventually, they lost the ODI by 3 wickets and the series was conceded as well.

After the match, Ranjan Madugalle pressed a sanction on the Sri Lankan side. They were found to be one over short of the target, after taking the time allowances into consideration. As a result, 20% of their match fees were docked. Dasun Shanaka accepted the sanction so there will be no formal hearing. The on-field umpires Kumar Dharmasena and Lyndon Hannibal leveled the fine after the match.

What will hurt the Lankan side more is the fact that they’ve lost one point in the World Cup Super League table as a result. They are already placed in the 12th position, only ahead of Zimbabwe by two points having played five games more. Since the introduction of the table, the Lankans have won just one game out of 11, and are currently outside the qualification race.

Each win is worth ten points, while a no-result fetches a team five points. Even Team India lost a point after violating the over-rate rule against Australia last year. Currently, England sits at the top of the table with 95 points from fifteen games, while Bangladesh is second with 80 points from 12 games. Only the top 8 eight teams secure qualification directly, while the rest play the qualifiers.