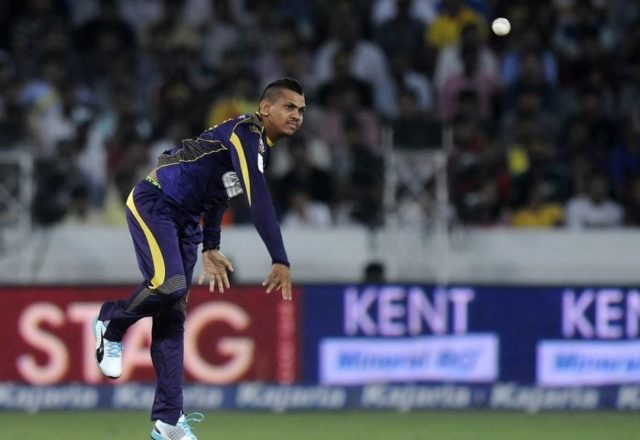 Kolkata Knight Riders star bowler Sunil Narine’s bowling action has come under the scanner after their game against Kings XI Punjab in the Abu Dhabi. Incidentally, Narine played a significant role as Kolkata secured a two-run win over Punjab in the last over.

Sunil Narine recorded excellent figures of two for 28 as Kolkata dumped Punjab to almost throw them out of the competition. The spinner from West Indies came to attack was spot on right from the word go. He hit the right line and length to make the lives difficult for the Kings XI Punjab batsmen.

After an eventful performance, dark clouds hang over Sunil Narine’s head. A statement issued by IPL Governing Council has stated that Narine has been reported for bowling with a suspected illegal action. The on-field umpires reported it according to the IPL’s Suspected Illegal Bowling Action Policy.

However, he can continue bowling in IPL 2020 until another reporting following which he will be banned from bowling in the competition.

“Sunil Narine, the Kolkata Knight Riders player, has been reported for bowling with a Suspected Illegal Bowling Action during his side’s Dream11 Indian Premier League (IPL) 2020 match against Kings XI Punjab at Abu Dhabi,” IPL said in a statement.

“The report was made by the on-field umpires according to the IPL’s Suspected Illegal Bowling Action Policy. Mr Narine will be placed on the Warning List and is permitted to continue to bowl in the tournament,” it added.

Meanwhile, it will be a massive blow for Kolkata Knight Riders, who have started to find their feet in IPL 2020. Sunil Narine will be debarred from bowling in the ongoing tournament if he is found guilty one more time. He will have to take a clearance from BCCI Suspect Bowling Action Committee to resume his bowling.

Meanwhile, this is not the first time, Sunil Narine’s bowling action has come under the scanner. In the 2015 edition of IPL as well, the organisers banned Narine from bowling. He then subsequently appeared for a biomechanical analysis of his bowling action at the Sri Ramachandra Arthroscopy and Sports Sciences Centre (SRASSC) in Chennai.

It will be interesting how Sunil Narine responds to this. He will certainly be a lot cautious going forward and might slow down his speed which can hurt Kolkata Knight Riders for the rest of IPL 2020.