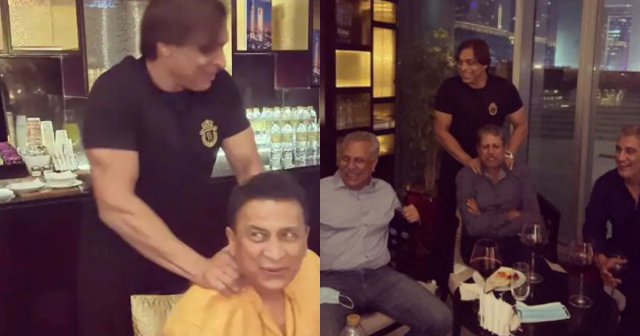 We are one week away from the most-awaited cricket match of the year. The arch-rivals India and Pakistan are set to face-off in the T20 World Cup on October 24. Fans from both nations are finding it hard to control their excitement and have already started making predictions ahead of the game.

Meanwhile, former cricketers from both nations got together in Dubai and shared some laughs ahead of the mega-clash. Shoaib Akhtar posted some pictures on his Twitter account, in which he can be seen with Sunil Gavaskar, Kapil Dev, Zaheer Abbas, and Atul Wassan. In the photos, Kapil Dev and Sunil Gavaskar are receiving a shoulder massage from Akhtar.

“Chilling with the best of the best. The great Zaheer Abbas, Sunil Gavaskar & Kapil Dev. All set for the cricket ka maha muqabla”, Akhtar wrote in the caption.

India has a 12-0 record against Pakistan in World Cups and if you look at the squads and recent performances, Virat Kohli’s men are clear favourites again. The last time the two teams met, was in the 2019 ODI World Cup where India won comfortably by a margin of 89 runs.

With the match between the cross-border rivals becoming the buzz of the town, former Indian off-spinner Harbhajan Singh amused the fans by revealing the funny message he gave to Shoaib Akhtar ahead of the match.

“I have told Shoaib Akhtar, what is the point of Pakistan playing, you should give us a walkover, you will play, you will again lose, you will be upset. Our team is very solid, very strong, they will easily beat you guys,” Harbhajan said talking to Star Sports.

#MaukaMauka milte hi, @harbhajan_singh had a special message ahead of #INDvPAK! 😉

The T20 world cup, hosted by the BCCI, will take place in Dubai, Abu Dhabi, Sharjah, and Oman from October 17 to November 14. It was originally planned to be held in India, but due to the COVID-19 pandemic, it was moved to Oman and the United Arab Emirates. The tournament will take place over the course of four weeks and will include 16 teams from all around the world.