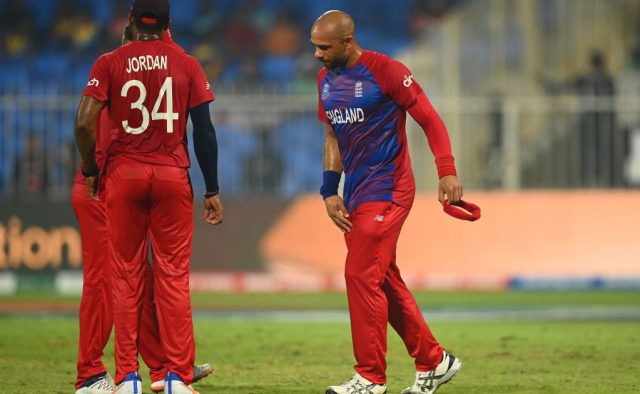 England have suffered a massive blow with star fast bowler Tymal Mills ruled out of the remainder of the ICC T20 World Cup 2021 with a thigh strain. Reece Topley has been added to the main squad in place of Mills.

Mills reported tightness in his right quadriceps during England’s 26-run win against Sri Lanka in Sharjah on Monday night. Tymal Mills, England’s joint-highest wicket-taker in the tournament, left the field after nine balls of his spell, immediately calling for a substitute fielder.

He was assessed by England’s medical team after the game and underwent a scan that ruled him out of the T20 World Cup. Tymal Mills had not played for his country since February 2017 ahead of this World Cup after a long battle with injuries – including a stress fracture last winter which forced him to wear a back brace for three months.

Reece Topley, who had been travelling with the England squad as a reserve player, has been added to the side as Mills’ replacement. Topley last played a T20I against South Africa in 2016 and has had a fair share of injury concerns as well. He has played six T20Is and has five wickets with an economy of 10.07.

Meanwhile, England have won all their matches so far in the Super 12 phase and have one foot in the semifinals. A win against South Africa in their final game will see them top the group while they are still likely to qualify even if they lose the contest.