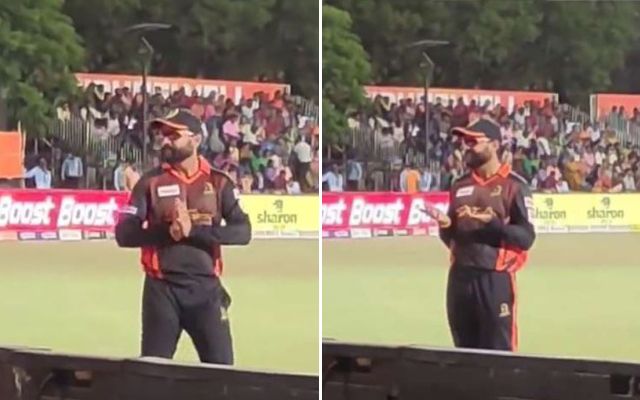 Indian cricketers Dinesh Karthik and Murali Vijay have been stalwarts of the game of Tamil Nadu cricket over the years. They have been prolific run-scorers for their team and have even made a name for themselves at the international level. While Murali Vijay is no longer in the scheme of things for India, he was a mainstay in the Indian Test team for many years. Recently, the opener was spotted playing in the Tamil Nadu Premier League, where he had a tough time with some of the fans.

During one of the Tamil Nadu Premier League 2022 matches for the Ruby Trichy Warriors, Murali Vijay was standing at the boundary ropes, when some fans started chanting Dinesh Karthik’s name, which made Vijay uncomfortable. Dinesh Karthik and Murali Vijay share an awkward relationship as Vijay married Nikita Vanjara, who was Dinesh Karthik’s first wife.

The Tamil Nadu opener, however, reacted to the fans in a calm manner. He asked them to stop shouting the wicket-keeper’s name. The incident was caught on camera, and the video has gone viral on social media. Some users have praised Murali Vijay for keeping his calm and handling the situation in such a manner. While some have criticized the behavior of the fans towards the Indian cricketer.

Indian cricketer Murali Vijay was out of action for several months, before he marked his comeback in the Tamil Nadu Premier League 2022 season. He rolled back the years, as he slammed a 66-ball 121-runs for the Ruby Trichy Warriors against the Nellai Royal Kings. His knock included seven fours and 12 sixes, chasing 237 runs.

Unfortunately, Murali Vijay’s effort was not enough as the Warriors lost the match by 66 runs. The Ruby Trichy Warriors finished the season seventh on the points table with just two wins from seven matches. Murali Vijay was their leading run-scorer in the tournament. He scored 224 runs at an average of 56 and a strike rate of 172.30.