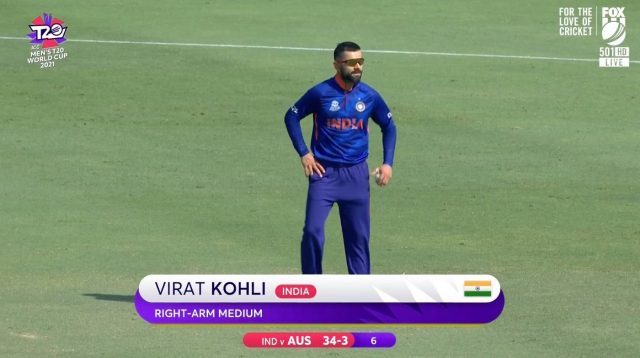 Virat Kohli was seen rolling his arms in the warm-up game against Australia as India’s hunt for the sixth bowling option continues ahead of the T20 World Cup. The incumbent captain bowled some gentle medium pace to give a sneak peek into the past.

Kohli was introduced into the attack by Rohit Sharma in the seventh over. He bowled some good lines to concede only four runs against the likes of Steve Smith and Glenn Maxwell. Virat Kohli came back in the 13th over and gave away eight runs.

He chipped in with two crucial overs and returned with figures of 0/12. Meanwhile, the fans went gaga as soon as Rohit handed the ball over to Virat Kohli. It was a sight to watch for the Virat Kohli fans.

Watch some of the reactions:

Bumrah to Kohli in the mid-innings break: pic.twitter.com/lAinn7vIZO

Recently Kohli as a batsman played as per Academy standards but he was unable to visit academy so he started Bowling 😍
Binny sir loved this enthusiasm😎#T20WorldCup pic.twitter.com/WTEF0wBN1f

Just 4 runs off the over and swing also, don't think there's a better 6th bowling option we have 😜#T20WorldCup #IndvAus

Virat Kohli just went for 12 runs from 2 overs in the Warm-up match against Australia.

Albie Morkel at home seeing that over from Kohli.. pic.twitter.com/UwCVbw6TdE

This wide line tactic is a good idea for Kohli, surely with his action convincing people to leave it alone

Virat Kohli is bowling to Steve Smith and Glenn Maxwell. This is peak cricket. 🤯🤯 pic.twitter.com/rJsIbJJrk4

Meanwhile, Australia recovered well from 11/3 to post 152 runs n the board. Glenn Maxwell continued his IPL role and provided an impetus to the innings in the middle overs before Steve Smith and Marcus Stoinis spent some quality time in the middle and added a 76-run stand.

Bhuvneshwar Kumar had a good outing after being hammered for 54 runs against England alongside Ravichandran Ashwin, who picked up two crucial wickets.

As the speculation continue to rife over Hardik Pandya resuming bowling, Rohit Sharma asserted that he will take some more time to resume bowling. Speaking at the toss, Rohit said:

“Hardik is coming along pretty well but he’s still going to take some time. He hasn’t bowled much. When you play this kind of a tournament, you need to be a 100%. He’s getting there. He’s not started bowling yet but in the next few days he starts bowling and he should be ready when the World Cup starts.”

India will begin their T20 World Cup campaign against Pakistan at the Dubai International Cricket Stadium on Sunday (October 24).