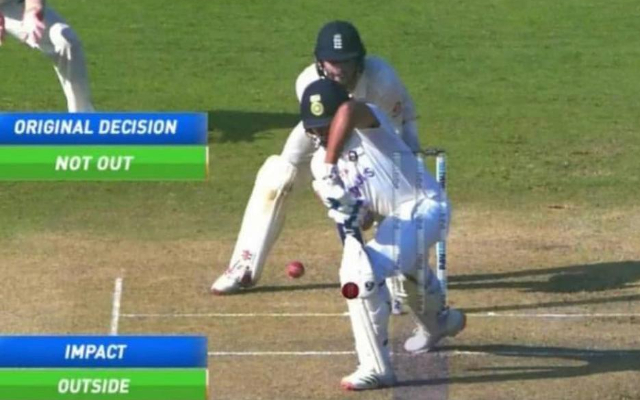 The ongoing 2nd Test between India and England witnessed drama on Day 1 when 3rd umpire Anil Chaudhary ruled Ajinkya Rahane not out on England’s referral despite having a clear spike on ultra-edge. Now today, the on-field umpire made a horrendous call which eventually helped Rohit Sharma survive the DRS call.

It happened during the 13th over into India’s second innings when Rohit Sharma was struck on the pads while offering no shot on Moeen Ali’s delivery, the entire England Team went up in an animated appeal only to be ruled not out by the on-field umpire Virender Sharma who is standing in his very first Test match.

After the England team went up for the review, the on-field umpire communicated to the 3rd Umpire that a shot was offered even though it was clearly evident that Rohit Sharma had the bat nicely hid behind the pad with no real intention of playing a shot. According to MCC – Laws of cricket, batsmen could be given out if the ball hit the pad outside off stump but was going on to hit the stumps, provided the batsman was not offering a shot.

In this case, Rohit Sharma clearly didn’t offer a shot but with the on-field umpire ruling it as ‘shot offered’, it ended up influencing the DRS decision since the impact was outside the 3rd umpire didn’t need to look any further ruling Rohit Sharma not out but if the onfield umpire had ruled it as ‘No shot offered’ then the impact wouldn’t have mattered, which would’ve resulted in the end of Rohit Sharma since ball tracking suggested, it would’ve crashed onto middle stump.

Sunil Gavaskar who was on English commentary at that point of time was shocked to see Virender Sharma ruling it as ‘Shot offered’,

“That is no shot offered, from what little I know of batting.” said Sunil Gavaskar on English Commentary

Bad one from Umpire Virender Sharma. No way in the world Rohit is offering a shot. 2 things: 1)Conversation between umps has to be fluid. TV ump should be able to overrule that call with clear evidence. 2)Alternately, captain needs to know the on-field umps call before reviewing

Rohit offered no shot, umpires have made a huge error. If I were England I would be asking a few hard questions before test 3! #INDvENG #cricket

Why can’t the third umpire decide whether a shot has been offered or not? The on field umpire has no special insight there! #INDvENG #DRS

Shot was clearly not offered there…

Another Umpiring Blunder in the 2nd Test.

3rd Umpire should have the autonomy to decide if shot was offered or not. #INDvENG

What kind of shot did Rohit offer there? #INDvEND

Flashback to Pujara being judged to have not offered a shot during the Aus series. #INDvENG

There was no shot played there. Rohit survives. The umpiring needs to get better.

Shocking every cricketer in the world knows he didn’t play a shot!! Terrible umpiring #sharma

That’s not playing a shot.#INDvsENG