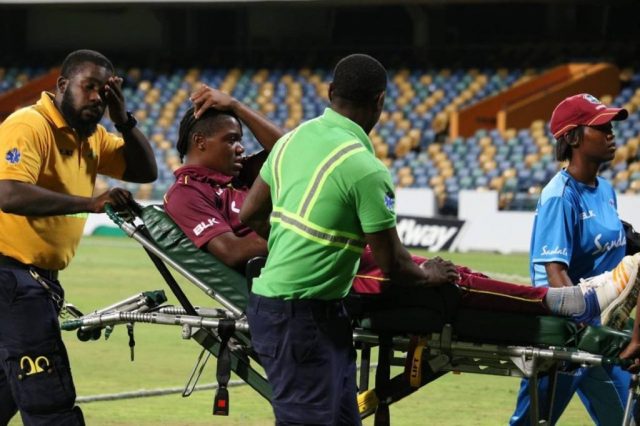 West Indies Women defeated Pakistan on Friday, in a rain-affected second T20 International. The T20I witnessed a worrisome incident when two West Indies cricketers – Chinelle Henry and Chedean Nation, collapsed on the field, in a span of 10 minutes.

Both the incidents took place during Pakistan’s chase. They were then taken to the hospital, where they were conscious and stable.

“Chinelle Henry and Chedean Nation were taken to hospital for medical attention,” “Both Henry and Nation are conscious and stable at a hospital and are being assessed,” said CWI in a statement.

West Indies Women continued the game with two substitutes. which they eventually won on Duckworth-Lewis-Stern by seven runs.

“The thoughts and prayers of the whole Pakistan team are with Chinelle Henry and Chedean Nation. We wish them a quick recovery and are hopeful that we will play against them in our next match on Sunday.”

She also praised the hosts for continuing the second T20I after the incident.

“Such incidents are tragic and can shake whole dressing rooms. Hats off to the West Indies that they turned up and completed the match despite the grave incident.”

West Indies women won the second T20 International on DLS by 7 runs and have sealed the three-match T20I series. The hosts won the first T20I by 10 runs after Pakistan fell 10 short of the 136 runs total.

In the second T20I, West Indies opted to bat first. On the back of contributions from Chedean Nation and Kycia Knight, 28 and 30* respectively, the Caribbeans managed 125/6 in 20 overs. Anam Amin and Fatima Sana picked up two wickets each for Pakistan.

Pakistan suffered early blows as they were reduced to 25/3 in 6 overs. A 42-run partnership between Nida Dar and Sidra Nawaz steadied the ship for the visitors. The match was called off early and West Indies were declared winners on the DLS method.