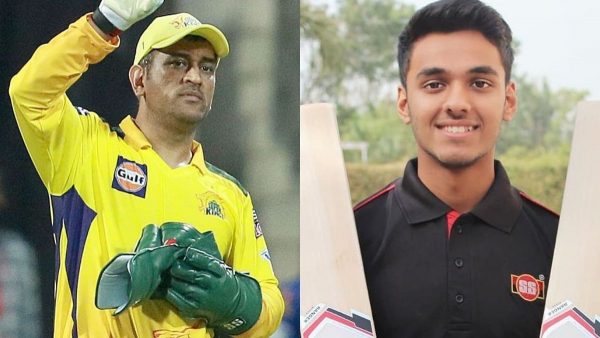 Utkarsh Singh, a young all-rounder from Jharkhand recently spoke about how advice from India’s former captain MS Dhoni helped him hone his skills. He also revealed the influence that Dhoni has over the cricketers in Jharkhand. The canny spinner, who has the potential to be a middle-order batsman, was roped in by Punjab Kings (previously known as Kings XI Punjab) for his base price of ₹ 20 lakh.

In the 2018/19 Ranji Trophy session he could manage only 6 wickets in 8 matches; the number tally escalated to 16 in the next season playing the same number of matches. His impressive white-ball performance fetched him an IPL contract.

Going back in time, Utkarash Singh revealed how MS Dhoni’s advice changed his perspective about the game. The young cricketer also added Dhoni has been the guiding influence for all young cricketers coming up the ranks in Jharkhand.

“Whenever we have a camp in Ranchi, he always comes and practices with the team. And obviously, he’s always been a guiding influence on all of us here,” Utkarsh Singh said in an exclusive with Punjab Kings.

“I remember him telling me ‘Utkarsh dekh, mujhe sirf ek hei cheez chahiye, I want you to turn the ball every time you’re bowling,” revealed the all-rounder.

“While bowling I see myself as a pure bowler and while batting as a pure batsman,”Utkarsh Singh.

The 22-year-old Utkarsh Singh spoke about his desire of contributing both with the ball and the bat for his team. He distinguished both the responsibilities separately.

Utkarsh gave the credit to the Chennai Super Kings skipper for his improvements and his latest success in the franchise-based league. He is yet to play a game and will look to make the most of the opportunity if an opportunity comes his way in IPL 2021.

“And he (Dhoni) has advised me on how to bowl in different situations, how to read and assess the game, and ever since his advice I have made it a point to consciously look to turn the ball more. And turning the ball has helped me as a bowler.”

“Because there is always an uncertainty in the minds of the batsmen, be it a right-hander or a left-hander,” he added.