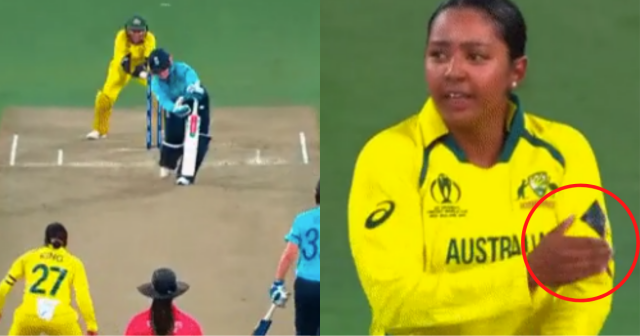 Australian cricketer Alana King paid a tribute to legendary spinner Shane Warne in her own way during the ongoing Women’s World Cup 2022. In the game against England on Saturday, Alana deceived Tammy Beaumont with her leg-break, just the way Warne bamboozled the batters throughout his career with his craft.

Alana gave a nice bit of flight to the ball, luring Beaumont to walk down the track. Then the sharp turn meant that the ball went past the outside edge of the batter. Wicketkeeper Alyssa Healy made no mistake in executing the stumping.

After the dismissal, Alana patted the black armband worn in memory of Shane Warne, who breathed his last yesterday only at the age of 52.

There will not be a more fitting wicket taken in any cricket today. #CWC22 pic.twitter.com/Opha3R49cz

Shane Warne – The King of spin

Shane Warne was one of the only two bowlers in international cricket to have taken over 1,000 wickets. His 708 Test wickets were second overall and first among leg-spinners. Only Sri Lanka’s Muttiah Muralitharan was ahead of him with 800 wickets. Warne ended the 2005 Ashes with a bowling average of 19.92 and 40 wickets. He also made an impact with the bat, scoring 249 runs at an average of 27.66. Without a question, it was his best Ashes campaign.

His delivery, which bamboozled Mike Gatting in 1993, is often regarded as the finest ever ball in cricket history. Gatting was baffled as the ball, which had been pitched outside leg, spun magically and rattled his off stump.

Warne captained Australia in 11 ODIs between 1998 and 1999. Australia enjoyed an amazing 90.90 percent victory percentage under his leadership. Shane Warne announced his retirement from international cricket in 2007.

Shane Warne was named captain of the Rajasthan Royals in the inaugural IPL season in 2008. Despite the fact that the squad lacked star players, Warne led Rajasthan to a historic victory.