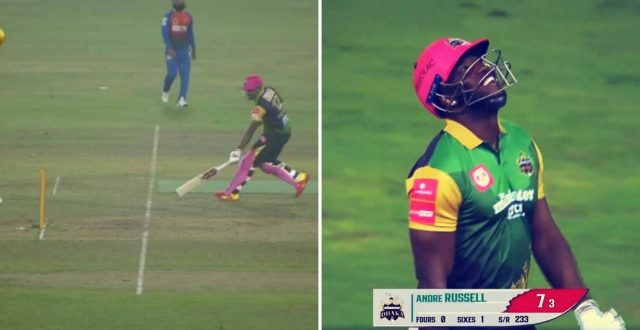 The game of cricket has been around for more than two centuries now. Starting off in certain specific parts of the world, cricket has now spread its wings globally. In its long history, there has hardly been anything that the cricket fan hasn’t seen. From batsmen falling over their stumps to bowlers biting into the cricket ball, we have seen all kinds of drama unfold on a cricket field.

In the modern game, there rarely occurs an incident that captures the attention of one and all as something unseen. Something similar happened in a Bangladesh Premier League match today.

Andre Russel played a ball from Thisara Perera towards short third man, hoping to get a quick single. The fielder was quick on his toes, grabbing the ball and getting rid of it in a jiffy. He managed to successfully hit the stumps at the wicketkeeper’s end but Mahmudullah had already made his way in by a whisker.

However, the ball ricocheted off the stumps and went on to hit the stumps at the bowler’s end. Andre Russell who was running towards that particular end was rather casual in his approach since he would naturally have felt no threat of being run out because the throw was aimed at the other end.

Replays showed that the ball knocked off the stumps before Andre Russell could get in, making way for one of the freakiest dismissals ever seen where a fielder managed to hit both stumps with the same throw and actually get someone out.

It would take something extraordinarily bizarre to happen to beat this kind of dismissal. The run out has been a hot topic for discussion amongst fans who were thoroughly entertained with this unusual occurance.