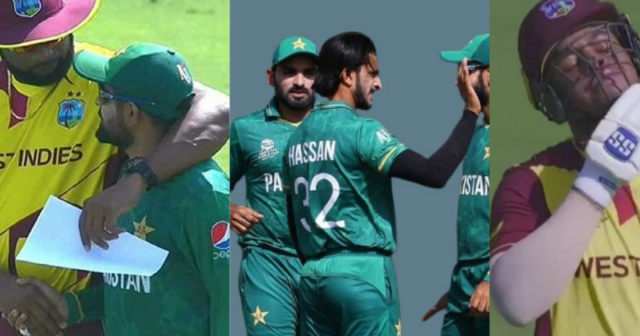 Cricket is a sport that frequently puts teams and players’ values to the test. There are various instances when the player has to decide between what is ethically correct and what is beneficial for his team. In a recent women’s test match between India and Australia, Indian batter Punam Raut decided to walk back to the dugout despite being given not-out by the umpires. This evoked mixed reactions among fans and cricket experts. Some praised Punam for her honesty while others criticized her for not prioritising the team’s interest over her individual calls.

One such incident took place during the Men’s T20 World Cup 2021 warm-up match between West Indies and Pakistan as well. In the 15th over of the 1st innings, left-handed batsman Shimron Hetmyer was adjudged caught behind by the umpire, off the bowling of Pakistan’s lead pacer Hasan Ali.

Looking at the confidence in Pakistan’s appeal, it seemed to be a good decision but Shimron was not at all happy with it and he also expressed his disappointment about the same. Shimron pointed that the sound which the umpire heard was of his chain hitting the helmet and there was no contact between his bat and the ball.

With DRS not available, Shimron Hetmyer started to walk back to the dressing room but, in a great gesture of sportsmanship, Pakistan captain Babar Azam called him back. Later replays also suggested that Hetmyer was not out. This gesture of Babar and his teammates was greatly appreciated by the cricketing fraternity.

This is how Twitter reacted to Babar Azam’s gesture:

Good sportsmanship today by Babar Azam & his team. Hetmyer was given out caught behind & was starting to walk back to the dugout. However Pakistan's skipper decided to call him back as a goodwill gesture after realising it was a wrong decision by the umpire #T20WorldCup #pakvsWi

Good Sportsman-spirit by Babar Azam. Hetmyer was given out in a wrong decision and then Babar decided to call him back to bat in the warm-up match in #T20WorldCup.

Babar Azam displayed some good sportsmanship by calling Shimron Hetmyer back after he was given wrongly out by Richard Illingworth. Hetmyer soon after being given out, signalled that his gold chain has hit the helmet grill.#PakvWI #ICCT20WorldCup2021

Hetmyer wasn't happy with Caught Behind decision as He felt it was his "Chain Noise"
As He was walking off, Skipper Babar Azam called Him back.
Great Sportsman spirit shown by My Skipper ❤#BabarAzam #pakvsWi #T20WorldCup pic.twitter.com/U4lj7OQDmo

That was fantastic gesture from Babar Azam, called Hetmyer back when ump gave it out !

Pakistan will next play South Africa in a warm-up match on Wednesday before facing arch-rivals India in the high-voltage match on Sunday.