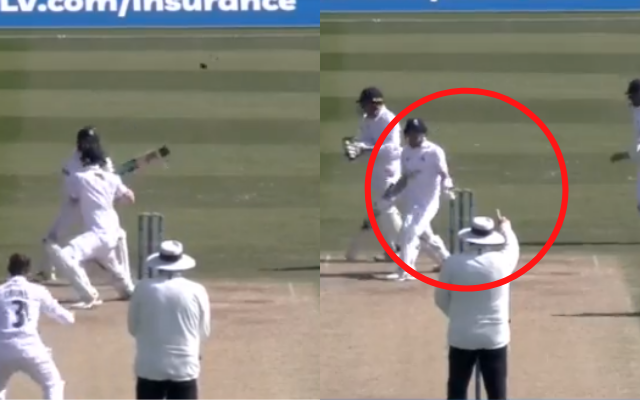 County Championship is the most popular first-class tournament in the world where many big legends across the world come together to compete against each other. Cheteshwar Pujara, Shaheen Afridi, Mohammad Rizwan, Hasan Ali, and Marnus Labuschagne are some of the popular players playing in the ongoing County season 2022.

In the county match between Kent and Hampshire at St Lawrence Ground, cricket fans witnessed a bizarre decision from the umpire which shocked the cricket fraternity. It has raised several questions about the umpire for giving such a shocking decision.

However, in the 80th over, Jordan Cox decided to leave the ball on the front foot of the bowling of Felix Organ. The ball struck his pad far outside the off stump. After striking the pad, the ball touched his shoulder and went straight into the hands of Weatherly who was standing at the forward-short leg. Felix and Hampshire teammates appealed for it and the umpire didn’t hesitate in giving it a catch out. The batsman was absolutely shocked by this bizarre decision.

From the naked eyes, it didn’t look like the ball touched the bat after striking the pad. Not only batsman, but several cricket fans also couldn’t digest the fact that the umpire gave it out. Umpiring in a cricket match is never an easy job. He has the responsibility to make accurate decisions within a few seconds. But after all, umpires are also human beings and they can also make mistakes.

You're the umpire. Are you giving this out? 👀#LVCountyChamp pic.twitter.com/ec4fwFJOAS

Despite the patient innings from Jordan Cox, Kent couldn’t save the match. Hampshire won the match by an innings and 51 runs. Earlier in the match, Kent won the toss and decided to bat first. Kent could only score 305 runs while batting first. In reply, Hampshire scored a mammoth total of 652 runs.

Hampshire got a massive lead of 347 runs. Kent couldn’t handle the pressure of such a big lead on the final day and got all out on 296 runs on the final day. Liam Dawson who scored brilliant 171 runs was the star of the match for Hampshire.