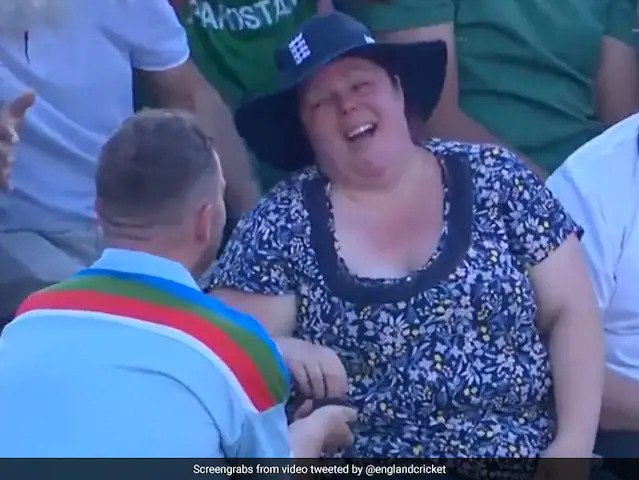 The third and the final T20I between England and Pakistan at the Emirates Old Trafford in Manchester witnessed a beautiful turn of events on the screen. A cricket fan went down on his knees to propose to his girlfriend.

In front of more than 20,000 people in the crowd at Old Trafford, the loved-up couple was captured beautifully on the cameras in the ninth over of the match. The man was identified as Phil and the lady as Jill by commentator David Lloyd.

The man went down to propose the love of his life and he got the much-awaited ‘Yes’ as a reply. England And Wales Cricket Board (ECB) also shared the heartwrenching clip and greeted the couple. They tweeted:

The video was well-received by the fans and spread like wild fire. Renowned commentator David Lloyd also narrated the whole incident.

“Hello, what’s happening here? Oh, Not another, not another. Big screen as well…. Jill and Phill, decision pending… and here she said YES….,” David Lloyd narrated the moment during his commentary.

England seal series with a three-wicket win in 3rd T20I

Batting first, Pakistan posted a decent total of 154 runs with wicket-keeper Mohammed Rizwan (76) being the top scorer of the side. In reply, England got off to a flying start but veteran all-rounder Mohammad Hafeez brought the visitors back in the hunt with three wickets.

But skipper Eoin Morgan played a crucial knock in the end to seal the match and the series in England’s favour.