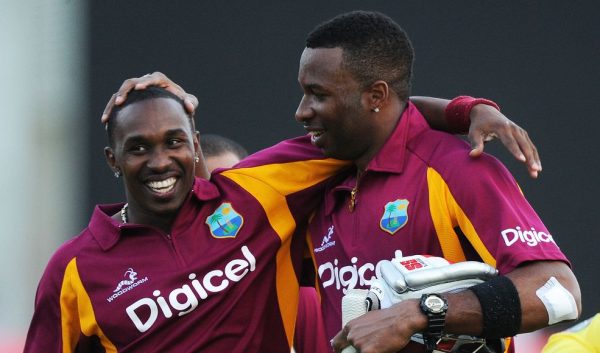 West Indies and Australia took part in the second T20I match of 5 matches T20I series at the Gros Islet on July 10. The hosts West Indies got the second consecutive victory by defeating tourist Australia. Currently, West Indies are leading the series with 2-0. Meanwhile one of the big highlights of the match was a one-handed sixer by Dwayne Bravo.

In the second T20I Australia won the toss elected to field first just to receive a huge target to chase. West Indies didn’t have a good start as the top 3 batters got out at the score of just 59. However, after that, the storm came when Bravo and Shimron Hetmyer were batting together. The two powerhouse batsmen had brilliant 103 partnership between them. With the help of the sensational innings of Bravo and Hetmyer and cameo of Russell, West Indies scored 196- 4.

During the 13th over,Bravo smashed Star spinner, Ashton Agar, to a massive one-handed six. The long six made the ball land on the roof of the stadium.

The West Indies bring up 100 with a beautiful one-handed six!

Meanwhile, when Australia came to bat they witnessed failure by openers Aaron Finch and Matthew Wade. However, Mitchell Marsh carried his form from the first match and scored yet another fifty. Other than Marsh no batsmen were able to impress the fans. Australia faced a batting collapse one more time losing 7 wickets for 39 runs. Meanwhile in the end with amazing spells of Walsh, Fabian Allen, and Cottrell they managed to bowl Australia out before the innings ended. Australia was dismissed at the score of 140 in 19.2 overs.

Also, Shimron Hetmyer was awarded Player of the Match for his sensational 61 runs knock.

“One of my best innings for me, was hitting quite well, it quite worked out, my role is to bat as deep as possible. I didn’t do anything different, just did the same thing like last game, the partnerships were important. Was looking to bat deep and give the gutsy a chance to bat at the other end. I’m trying to bat well and finish off the innings as well. I have never batted with him before, nice to bat with him, he was just telling me to keep going and do what I did best. Allowed me to trust myself” – Said Hetmyer