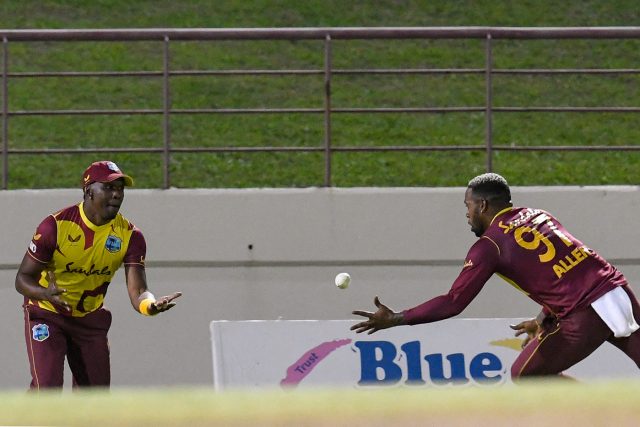 West Indies put up a dominating show to beat Australia by six wickets in the third T20I. The hosts now have an unassailable 3-0 lead in the five-match T20I series. The match witnessed several outstanding performances. But Fabian Allen’s breath-taking effort to dismiss Aaron Finch stole the limelight.

In the 12th over of the Australian innings, Aaron Finch while trying to clear the fence, mistimed a slog sweep. Dwayne Bravo came underneath the ball but fumbled while completing the catch. Fortunately, Fabian Allen’s brilliant presence of mind saved the day. Allen put in an acrobatic dive to catch the ball.

Still can't get over this 😮

Fabian Allen had a great day in the field as he also dismissed the in-form Mitchell Marsh. Marsh is the leading run-scorer in the series with 114 runs, including two fifties at an average of 38.00. Allen finished the match with bowling figures of 4-0-26-1.

The Universe Boss, Chris Gayle achieved the 14,000 runs landmark in the T20s. He became the first batsman in the world to do so. In the third T20I, he smacked the Australian bowling attack all around the park. Gayle scored 67 runs off 38 balls, including four boundaries and seven sixes.

West Indies wicket-keeper batsman and captain, Nicholas Pooran contributed 32 off 27 deliveries to chase down the 142 runs target in 14.5 overs. Pooran termed his teammate Chris Gayle as the “greatest T20 batsman”. He was also all praise for his “mentor” Kieron Pollard.

“It was a top game. We kept asking for improvement. Today we executed our plans both with bat and ball. He (Gayle) is the greatest T20 batsman to play this game, really pleased for him. I didn’t dream (of winning three straight matches during the start of his captaincy ) but this is a lovely bunch of guys. Also Polly (Pollard) and our coach.”

“He (Pollard) is my mentor and has been someone who has always wanted me to do well. He is always helping me out,” said Pooran.