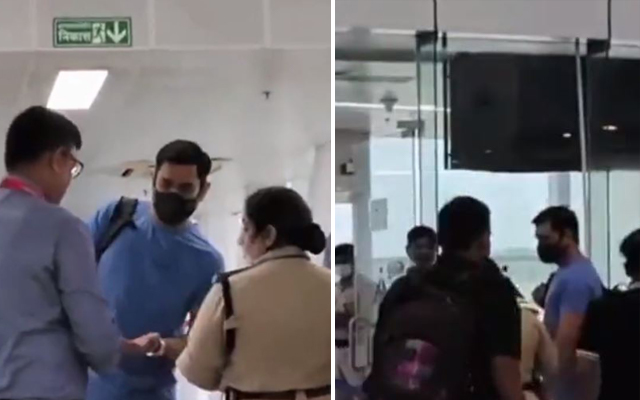 Former India captain MS Dhoni is one of the most loved cricketers all across the world. His cricketing talent, astute leadership, and his calm demeanor have earned him a massive fan following. He owns a special place in the heart of Indian fans, as he is the only Indian captain to win all three ICC trophies. The wicket-keeper once again won the heart of his fan, with a humble gesture at the Ranchi Airport.

In a video shared on Twitter, MS Dhoni was seen arriving at the Ranchi airport, to fly to Chennai. He graced the airport staff and fans, who were standing in the queue with warm handshakes. The video of the incident has garnered a lot of attention and has gone viral on social media. The fans are amazed by MS Dhoni’s humbleness and lauded the former Indian cricketer for his sweet gesture.

MS Dhoni was recently in the United Kingdom with his family and friends to celebrate his wedding anniversary and his birthday. He was in attendance at the 2022 Wimbledon enjoying watching his favorite tennis stars play. The Chennai Super Kings captain was also present for India’s matches in London during their England tour.

Indian all-rounder Hardik Pandya met his former captain, MS Dhoni, after the conclusion of the limited-overs tour to the West Indies. He shared a picture with the legendary cricketer on his social media profile. Recently, in a conversation with Dinesh Karthi, Hardik revealed MS Dhoni’s advice to him on how to handle pressure.

“Early in my days, Mahi Bhai taught me one thing. I asked him how do you get away from pressure and everything. And he gave me very simple advice, ‘Stop thinking about your score and start to think of what your team requires,” he said,

Hardik Pandya captioned the photograph with MS Dhoni, with an emoji of GOAT (Greatest of all time) “🐐 👑”.