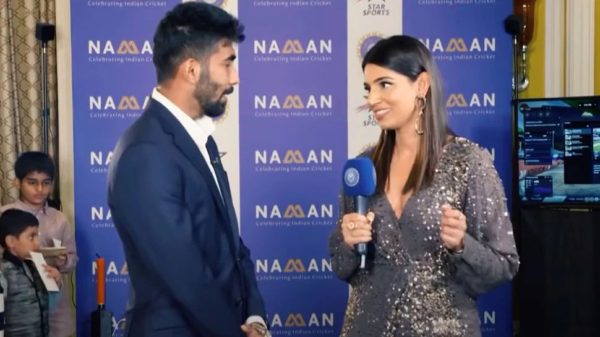 Rumours about Team India fast bowler Jasprit Bumrah’s marriage are floating all over the internet ever since BCCI released him ahead of the fourth Test against England at the Narendra Modi Stadium in Ahmedabad. He is also skipping the ongoing five-match T20I series amid reports that he is all set to tie the knot next week in Goa.

Reports have emerged that popular sports presenter and former Miss India Sanjana Ganesan is set to become Bumrah’s life partner. However, both Bumrah and Sanjana are yet to come out in public regarding their wedding rumours and there has been no confirmation yet from either side. Earlier, South Indian actress Anupama Paramweshwaran was also in the fray but her mother has denied all such reports.

While not much is known about how the couple first met and their love story blossomed, a video from BCCI awards from January last year is going viral where Sanjana Ganeshan can be seen interviewing Jasprit Bumrah. At the award ceremony, the fast bowler from Gujarat was also made to face his own bowling in a virtual reality game by the sports presenter.

“I was playing against a very good bowler, difficult to tackle such bowlers. I would give him the credit,” Bumrah told Sanjana when asked about the experience of facing his own bowling in a virtual reality game.

“No he is very good, I will not take him on,” he added when asked if he would perform better as a batsman against himself next time.

Jasprit Bumrah and Sanajan Ganeshan want to keep their wedding a secret affair and the guests reportedly have been asked not to carry their cell phones for the ceremony, which is expected to be attended by the family members and some notable guests from the cricket fraternity.

The cricketer is likely to return to action during the three-match ODI series against England which is scheduled to take place in Pune.