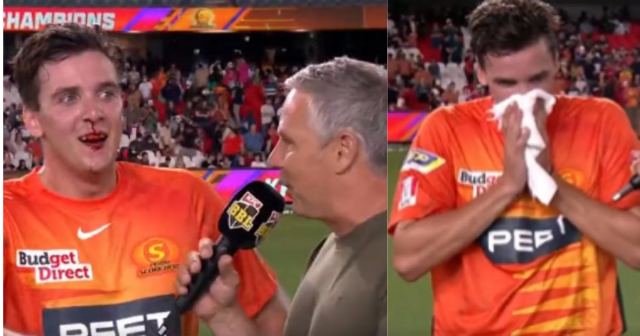 Perth Scorchers defeated Sydney Sixers by 79 runs in the Big Bash League (BBL) 11 final to win the trophy for the record fourth time. The Scorchers now have the most number of BBL titles, and it goes without saying that the players were overjoyed after the victory.

However during the wild celebrations, right-arm fast bowler Jhye Richardson was hit accidentally on the nose. His nose and lips began to bleed as a result of that. The video of the same has gone viral on social media and fans from all over the world are praising Richardson for having a smile on his face despite what appeared to be a painful injury.

“I was busy appealing and Munners (Colin Munro) had run in from deep square leg and got his shoulder into my nose. So, war wounds, but it’s all worth it.” Richardson said in the video.

After being asked to bat first, the Perth Scorchers put 171/6 on the board, thanks to half-centuries from Laurie Evans and Aston Turner. In reply, Sydney never seemed to be in the chase.

Apart from Daniel Hughes, no one showed application and the Sixers were bundled out for just 92 runs. Jhye Richardson’s toe-crushing yorker to remove Steve O’Keefe sealed the victory for the Scorchers.

The defeat ends a dreadful week for the Sydney side, which was plagued by injuries and illnesses. Star batter Steve Smith had shown interest in playing for the Sydney Sixers after Australia’s series against New Zealand was postponed, but his application was rejected by Cricket Australia.