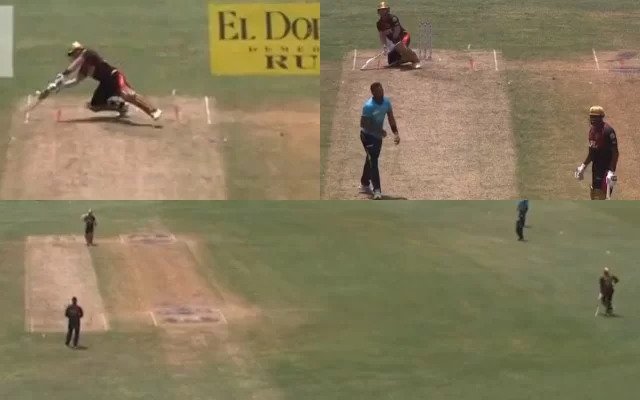 A couple of matches into the ongoing edition of the Caribbean Premier League (CPL 2021), the tournament is already filled with drama. On Tuesday, a frustrated Kieron Pollard expressed disappointment over poor umpiring during the game between Trinbago Knight Riders and St Lucia Kings at Warner Park in St Kitts.

The incident took placed during the 19th over of the Knight Riders’ innings who were asked to bat first after losing the toss. The team was in the middle of a brilliant partnership between Pollard and Tim Seifert. The set batters looked to pocket some quick runs in the final overs when a silly error from the umpire irked Kieron Pollard.

In a bid to not concede runs, Pakistan pacer Wahab Riaz ran in and delivered a wide yorker. But it was so wide that even after Tim Seifert stretched completely, he couldn’t reach the ball. The batsman had not shuffled even a bit as well and even then, the umpire didn’t call it a wide delivery.

The batsmen weren’t happy with the decision and Kieron Pollard expressed his disappointment there itself. The TKR captain had a chat with the umpire questioning his decision and walked away from the non-striker’s end far from the actual position where the batsman had to stand. He stood near the 30-yard mark to show his displeasure and the video of the same has gone viral now.

Meanwhile, this is not the first time Kieron Pollard has openly protested against poor umpiring. He has come with unique protests every time umpire has given an unfair decision.

The Knights are back and how🔥

The Knight Riders banked on late shows from skipper Kieron Pollard and Tim Seifert to post 158 runs in 20 overs which in the end proved to be too much for St Lucia, who fell short by 27 runs.

Ravi Rampaul and Isuru Udana starred with the ball picking up three and two wickets each to seal the deal for the defending champions.