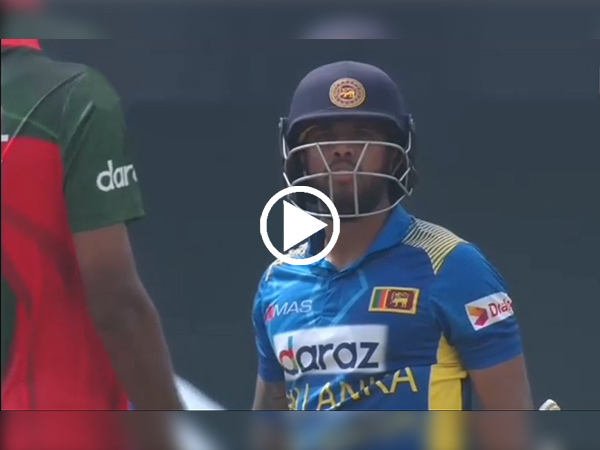 Sri Lanka beat Bangladesh in the third ODI by 97 runs to avoid a clean sweep in the three-match ODI series. Bangladesh won the first two games and the series in the process. However, they lost the final game in Dhaka and failed to complete a clean sweep. Meanwhile, Sri Lanka’s Kusal Mendis and Bangladesh’s Shoriful Islam were engaged in a heated exchange which became the talking point in the contest.

The spat between Kusal Mendis and Shoriful Islam happened in the 17th over of the Sri Lankan innings. Shoriful bowled an off-cutter, but Mendis couldn’t make a connection and got beaten. Seeing his get beaten Shoriful tried to say a few words to Mendis who responded back with anger. However, the situation came into control, and play resumed soon after.

Kusal Mendis scored 22 off 36 balls and played his part in helping Sri Lanka post 286/6. Lankan skipper Kusal Perera (120) scored a match-winning century and Dhananjaya de Silva chipped in with a crucial unbeaten 55. Dusmanta Chameera then took 5/16 with the ball to bowl out Bangladesh for just 189.

Despite losing the series, Bangladesh are topping the ICC Men’s Cricket World Cup Super League points table. They are on 50 points from nine games. England are placed second with 40 points nine games while Pakistan on 40 as well from six games.

This was not a good series for Shakib Al Hasan who made a comeback into the ODI squad. He registered scores of 15, 0 and 4 in the three games that he played. Shakib played for KKR in IPL 2021 but there too could not come up with decisive performances. The all-rounder will be playing for the Jamaica Tallawahs in CPL 2021 where he will reunite with Andre Russell.

Meanwhile, Tami Iqbal was a disappointed Bangladesh skipper after his team failed to complete the series win. The team a few catches too many which cost them the game ultimately.

“As I said at the end of the last game, we have won the series but I never felt that we played the complete game. Never played to our potential. Lucky that we are on the winning side but there are many areas that we need to seriously work on. When the opportunity came, we didn’t take our catches. If we had taken those, could have been maybe 30 runs lesser. (Overdependency on seniors) Maybe it is a concern. But I’m someone who always stands with the youngsters because I don’t think they aren’t trying,” Tamim said.