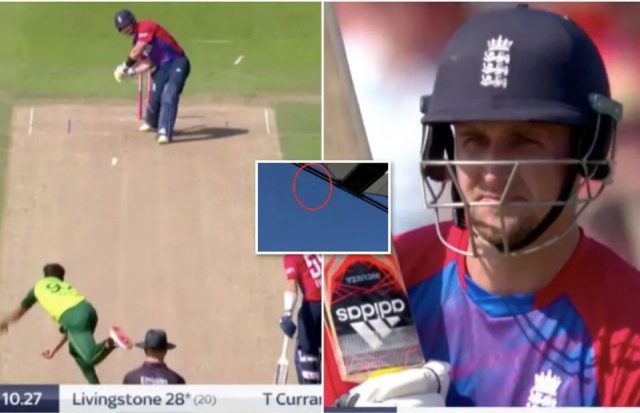 After hitting the fastest T20I century among England batsmen, Liam Livingstone once again grabbed the eyeballs with a towering six in the 2nd T20I against Pakistan at Headingley in Leeds. Livingstone deposited the ball outside the stadium into the nearby rugby ground and Haris Rauf looked in shock.

England were off to a flying start at 85 for two with Moeen Ali giving the early impetus. The Men in Green were slowly starting to get back into the game when Liam Livingston walked in. He had a slow start, scoring two runs off three balls, but once Haris Rauf was in the attack, Livingstone started changing gears.

In the 16th over of the innings, it was a familiar figure – Rauf in his run-up, there was Liam Livingstone at the striker’s end. It was a good length delivery and Livingstone threw his bat at it and connected well. Tt was probably the fastest delivery to exit the stadium with Livingstone’s long-leaver getting the ball off the middle of the bat.

After scoring one of the biggest sixes, the English international just casually shrugged his shoulders while Rauf looked stunned. The ball did not just exit the stadium, it went to the nearby rugby ground, leaving the fans and the commentators in utter disbelief.

Biggest six ever?! 😱 @LeedsRhinos, can we have our ball back? 😉

Banking on another masterclass from Liam Livingstone, England posted 200 runs on the board in their 20 overs. Although Pakistan got off to a flying start courtesy of Babar Azam and Mohammad Rizwan but once they were back in the hut, it was all over for the visitors.

Saqib Mahmood was the pick of the bowlers, picking three wickets while Moeen Ali and Adil Rashid registered two wickets each to win the match by 45 runs.

The third and final match of the series is on July 20 (Tuesday) at the Emirates Old Trafford in Manchester.