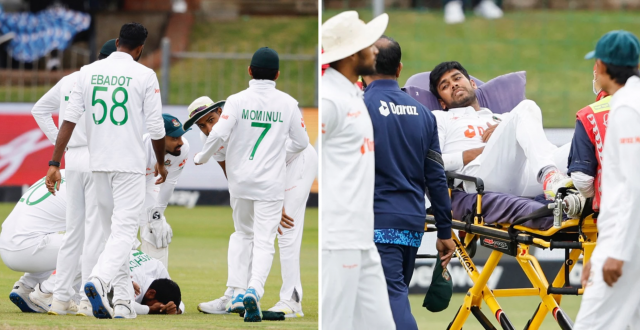 Bangladesh all-rounder Mehidy Hasan suffered a brainfade moment during the 2nd Test against South Africa at the St. George’s Park in Port Elizabeth. The incident took place on day 3 of the Test match.

After an immense lead in the first innings, the Proteas wanted to mount some more runs on Bangladesh to throw them out the tie. However, Ebadot Hossain came charging in with the new ball and created a chance in the first over of the second innings.

It was a short and wide ball from the tall and lanky fast bowler and Sarel Erwee was on his toes as he cut it to backward point. The ball went straight to Mehidy Hasan, standing at the point region. It was a dolly, but he clearly didn’t spot it, was looking at his left and reacted only after being hit on his stomach.

The all-rounder was seen rolling along the field in pain as he completely lost the ball under the lights. He was eventually stretchered off the field.

The missed opportunity cost Bangladesh the game, as Erwee went on to score 41 off 66 balls, helping the Proteas reach 179 for 6 in 39.5 overs before declaring and asking the visitors to chase the target of 413 runs to level the series.

Keshav Maharaj completes his second seven-wicket haul of the series as South Africa bowl out Bangladesh for 80 and complete a 2-0 whitewash.

The Proteas have wrapped up the proceedings within one hour of the fourth Test to rout Bangladesh 0-2 in the two-match series. Keshav Maharaj and Simon Harmer ran down the batting line up and were also aided by some reckless batting and inexplicable shot-making.

Liton Das and Mehidy showed little resistance but it didn’t take long for the latter to skip down the wicket and lose his wicket. After that it was just a formality and the South African spin twins didn’t waste much time to wrap up things. For a second straight Test they picked up all 10 wickets in the fourth innings.