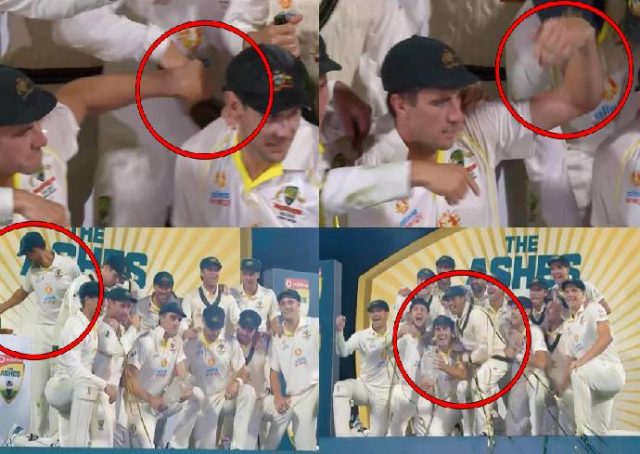 Australia captain Pat Cummins recently won hearts with his special gesture towards teammate Usman Khawaja after a historic 4-0 win over arch-rivals England in the recently concluded Ashes 2021-22. The Aussies recently thumped Joe Root & Co by a massive margin of 146 runs.

The entire squad bursts onto celebration after Cummins decimated the visiting side by cleaning up Ollie Robinson with a fuller delivery.

As the Australians were handed the trophy, their players were ready to burst open champagne bottles but Pat Cummins signalled them to keep their bottles away and told Usman Khawaja to rejoin the group, keeping his religious sensibilities in mind. Cummins’ gesture earned applause from all quarters which was one of the highlights of Australia historic win.

This might be a small gesture but this is what makes Pat Cummins great. He realised Khawaja had to dip because of the booze and rectifies it. pic.twitter.com/GNVsPGJhfK

Usman Khawaja made a memorable comeback to Australia’s Test team after three years during the fourth match of the series at the Sydney Cricket Ground by scoring a century in both innings. He was then accommodated as an opener for the fifth Test match, as Travis Head returned from missing the SCG Test due to testing COVID positive.

Khawaja failed to score big runs as an opener alongside David Warner in Hobart, while Head scored an outstanding century to return as the player of the match and series.

“We are on to something big” – Pat Cummins after Ashes win

Pat Cummins made an outstanding start to his captaincy stint, winning the high-profile Ashes series in dominant fashion. The 28-year-old believes this could be the start of something big for Australian cricket in the red-ball format.

“To be at the end of a 5-match series with so many positives and 4-0, yeah really pumped. I am really happy as a captain, not sure if he is (smiles, on not having to bowl Nathan Lyon in the entire game). We have had some 15 players used in this series, some tough calls,” Cummins said.

“Certainly feels like we are on to something big. Cam Green with bat and ball has been outstanding. Scotty Boland was fantastic. And hope the old pros continue their good work. I am super excited for overseas Test cricket. One thing in the pandemic we haven’t done is not play too much of Test cricket. So looking forward to adapt.”