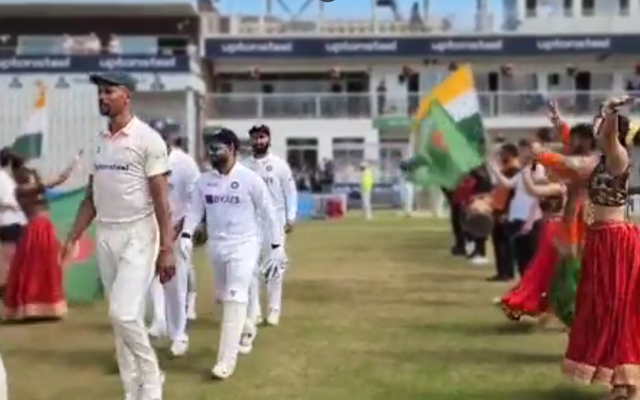 The Indian men’s cricket team is in England, for a multi-format series, including an only Test (the fifth rescheduled Test from last year’s outing), three T20 Internationals, and three One Day Internationals.

Before ‘the Ultimate Test,’ India is preparing for the epic battle, as the Rohit Sharma-led side is playing a warm-up game against Leicestershire, at Grace Road, Leicester.

The Indian skipper Rohit Sharma won the toss and elected to bat first. Even though it is a warm-up game, the Indian supporters have rolled up in Leicester, to see the Indian stars in action.  As the game started off, the players received a warm welcome while taking on the field. As soon as the umpires and players from both teams crossed the ropes, a group of musicians and dancers welcomed them in the Indian way.

A Bhangra tune was played and the dancers didn’t fail to impress the spectators with their astonishing dance moves. The Board for Control of Cricket in India (BCCI) has shared a video of the reception, via its official social media handle. While posting the video, they wrote: “That is some welcome for a practice game. Leicester is buzzing.”

That is some welcome for a practice game. Leicester is buzzing. #TeamIndia pic.twitter.com/uI5R6mafFV

Besides, the Indian team is currently leading the Test series by 2-1, although the winner of the Pataudi Trophy is yet to be concluded as India had to leave the tour due to the COVID-19 outbreak in the camp.

Here is the playing XI of both teams. The game is live on the Leicestershire official YouTube channel.