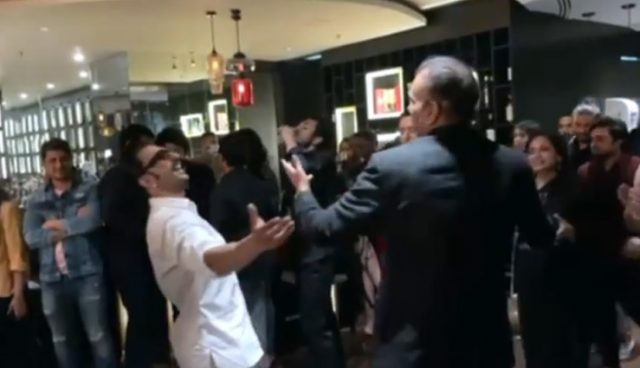 Former Team India head coach Ravi Shastri has once again made headlines, this time with his dance moves. Ever since he has posted the video, it went viral on social media. In thed video, Shastri can be seen dancing to the song ‘Hum Bane Tum Bane Ek Duje Ke Liye’ with the hero of the recently-released film ’83’, Ranveer Singh.

Notably, the film ’83’, which is based on India’s World Cup win in 1983, has done well at the box office. However, they welcomed the new year together. While sharing the video, Shastri wrote on his Twitter handle:

“#HappyNewYear! Getting into 2022 be like…thanks for the dance tips @RanveerOfficial. May 2022 be a wonderful, healthy, and inspiring year for each of you 🙏🏻”

Getting into 2022 be like…thanks for the dance tips @RanveerOfficial. May 2022 be a wonderful, healthy, and inspiring year for each of you 🙏🏻 pic.twitter.com/EvyTa7Ev4V

Incidentally, Ravi Shastri recently relinquished his duties as India’s head coach role after the ICC T20 World Cup 2021. He became the head coach in 2017. Under him, India has played 43 Test matches, winning 25 and losing 13, while 5 matches ended in a draw.

On the other hand, under Ravi Shastri, India defeated Australia in their own backyard, not once but twice in 2018-19 and again in 2020-21. Moreover, they were the only Asian team to do so as well. Team India reached the top of the Test format and played the final of the inaugural World Test Championship 2021 in England.

Ravi Shastri recently opened up on Team India’ current state. He said that the time has come for the coach and the captain to have a say in team selection.