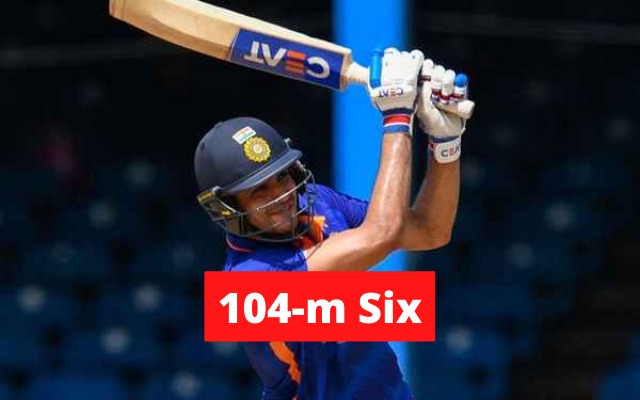 Indian opener Shubman Gill has been in some great form in the three-match ODI series against West Indies. He scored 64 runs in the first ODI match, followed by 43 runs knock in the second. India eventually won both the matches and has an unassailable lead of 2-0 in the series. Heading into the third match, the fans expected Shubman Gill to continue his form and the Indian batter hasn’t disappointed.

Shubman Gill walked out to open the innings for India along with skipper Shikhar Dhawan in the third ODI on Wednesday, July 27 at the Queen’s Park Oval in Trinidad. The duo got India off to a brilliant start, putting together a century stand for the first wicket. They took on the West Indies bowling and scored at a good clip for their team.

Shubman even slammed a monstrous six during his innings in the match. In the fifteenth over, Hayden Walsh bowled a leg-break against the right-handed batter. Gill put on his dancing shoes as he launched down the track to slam the ball over long-on for a clean six. The strike was so good that the ball traveled 104-meters, and the umpire had to look for a ball replacement straight away.

Earlier in the match, Indian skipper Shikhar Dhawan won the toss and opted to bat first. India brought in Prasidh Krishna in place of Avesh Khan, while West Indies made three changes to their playing XI. Jason Holder, Keemo Paul, and Keacy Carty came in for Alzarri Joseph, Rovman Powell, and Romario Shepherd.

Meanwhile, the play at the Queen’s Park Oval has been stopped by rain. India is 115 for the loss of one wicket. Skipper Shikhar Dhawan got out for 58 runs off 74 deliveries including seven boundaries. Shubman Gill is unbeaten on 51 runs, while Shreyas Iyer has just come to the crease.