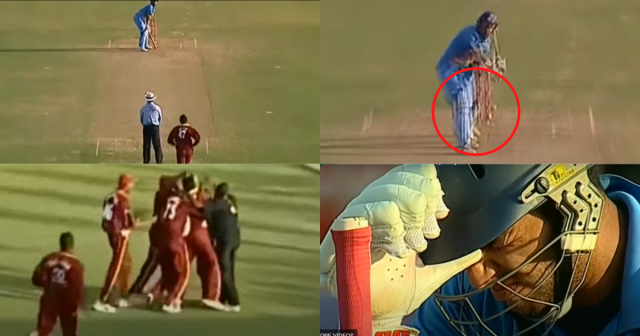 West Indian legend Dwayne Bravo has outplayed the top batters in the world through his bowling variations, with his slower one being the most lethal and successful delivery. The dip which he gets makes Bravo’s slower ball so hard to hit. In 2006, he bowled one such ball that deceived Yuvraj Singh, one of India’s finest limited-overs batters.

A strong Indian team led by Rahul Dravid were on a tour of the Caribbean islands. The tour started with a 5-match ODI series. The Men in Blue started with a bang, winning the first ODI comfortably by 5 wickets. India were favourites to win the second ODI at Kingston as well.

After deciding to bowl first, India got off to a great start, as both the West Indian openers- Runako Morton and Chris Gayle, got out within the first three overs. With a three-wicket haul, Irfan Pathan was the pick of the Indian bowlers. Ramnaresh Sarwan (98 not out) batted till the end and helped West Indies reach a decent total of 198.

In response, India at one stage were struggling at 60-4. After that Suresh Raina and Yuvraj Singh stitched a 64 run partnership to stabilise the innings. Even when wickets fell at the other end, Yuvraj Singh fought to push India closer to the target.

Dwayne Bravo, then 22 years old, bowled the final over with India needing 11 runs and West Indies 1 wicket, to win the match. India’s number 11 batter, Munaf Patel, was facing the first ball of the over. Munaf managed to bring Yuvraj back on strike for the next delivery, thanks to an inside edge off Bravo’s yorker.

Yuvraj Singh had a fortuitous escape off the second ball as he tried to smash hard in the leg-side but the ball caught his top-edge and soared over the reach of the keeper, Carlton Baugh, to the boundary. Yuvraj was prepared for the next ball, as he made some room for himself and hammered Bravo for a beautiful four through the covers region. India were now the favourites needing just 2 runs in the remaining three deliveries.

Dwayne Bravo, however, had other plans. He bowled a slow, dipping yorker, a delivery that would become his main weapon in the upcoming years. Yuvraj tried to steer the ball towards the leg side but was bamboozled by the speed of the delivery. The ball crashed the stumps, giving West Indies a one-run victory.

“Oh my goodness gracious. Miracle! Absolute miracle! Dwayne Bravo is the hero! From zero to hero for Dwayne Bravo. Being struck by Yuvraj for two successive fours…celebrations all around Sabina Park. And Yuvraj is stunned,” said the on-air commentator- Tony Cozier.

West Indies won this series by a margin of 4-1. In fact, following this defeat, India went on a terrible run in the ODI format, which included the early exit from Champions Trophy 2006, series defeat against South Africa, and then succumbing in the group stage of the 2007 World Cup.