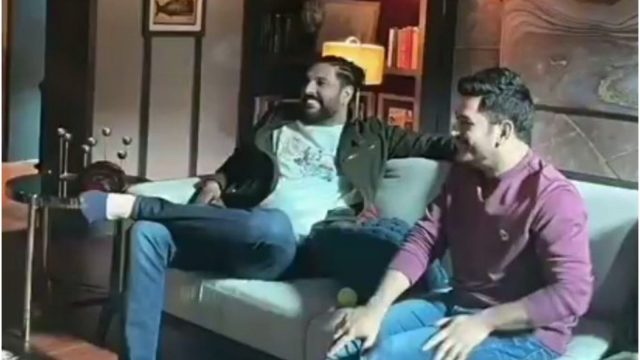 Former Indian cricketers and teammates Yuvraj Singh and MS Dhoni are set to reunite in an upcoming video. While the southpaw retired from international cricket in 2019, Dhoni took his retirement on 15th August 2020. However, he has continued to play in the IPL and will be playing for CSK in the upcoming season.

Meanwhile, Yuvraj Singh has launched the teaser of his upcoming video. The video shows him walking around his house with a ball in hand. He’s also seen shadow batting, with commentary from some of his matches, including the game against England in the 2007 T20 World Cup. Fans are also expecting MS Dhoni to be a part of this video as well.

“It’s that time of the year. Are you ready? Do you have what it takes? Have a big surprise for all you guys! Stay tuned” read the caption of his video.

It's that time of the year. Are you ready? Do you have what it takes? Have a big surprise for all you guys! Stay tuned! pic.twitter.com/xR0Zch1HtU

Who’s the other one knocked the door 🦸‍♂️

“God decides your destiny !!On public demand I’ll be back on the pitch hopefully in February ! Ain’t nothing like this feeling ! Thank you for your love and wishes, mean a lot to me ! Keep supporting India, it’s our team and a true fan will show his or her support in tough times” read his post on Instagram.

Despite retiring from international cricket in 2019, Yuvraj has played in the Abu Dhabi T10 League and the Road Safety Series in recent times. Yuvraj played 40 Tests, 304 ODIs and 58 T20Is. Dhoni, on the other hand played 90 Tests, 350 ODIs and 98 T20Is for India.