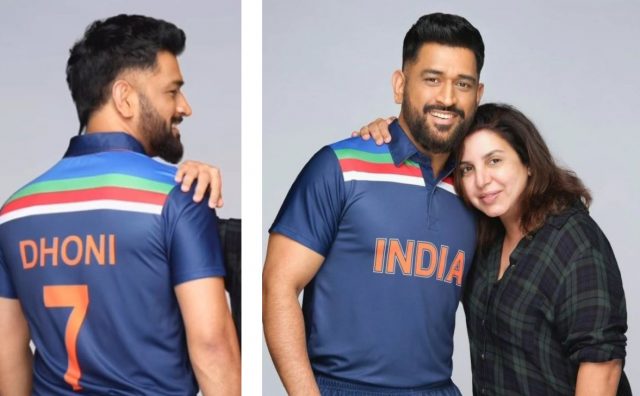 Former India skipper Mahendra Singh Dhoni announced his retirement from the game on August 15, 2020. He took to social media to post a compilation video set on the famous Bollywood song from the movie Kabhie Kabhie “Main Pal Do Pal Ka Shayar Hoon”. Exactly a year after, Dhoni will again be seen donning the Indian jersey.

A new Zed Black advertisement featuring the former Indian skipper was released earlier today. Viral Bhayani posted a video from the TV commercial. He wrote, “15th Aug 2020 is the day when MS Dhoni retired from international cricket. But, here’s a reason to rejoice for all thala fans exactly after a year. The iconic cricketer is seen in retro jersey look in his trademark swagger in Zed Black’s TVC released today.”

A few days ago, Farah Khan posted a picture of MS Dhoni and herself from the advertisement shoot on social media. She wrote, “Directed @mahi7781 for an ad today .. What an amazing guy.. so punctual, so down to earth, took pics with everyone frm clients to spot boys with a smile..im a fan ❤️❤️❤️ pic credit: @dabbooratnani #nonakhrastar”

The Chennai Super Kings franchise on Friday, August 13 landed in the United Arab Emirates for the second phase of IPL 2021. The tournament is all set to resume from September 19.

Chennai Super Kings will take on Mumbai Indians in their first match on September 19 at the Dubai International Stadium. They are second on the points table with five wins in seven matches. The three-time IPL champions will be keen to add one more IPL trophy to their cabinet.