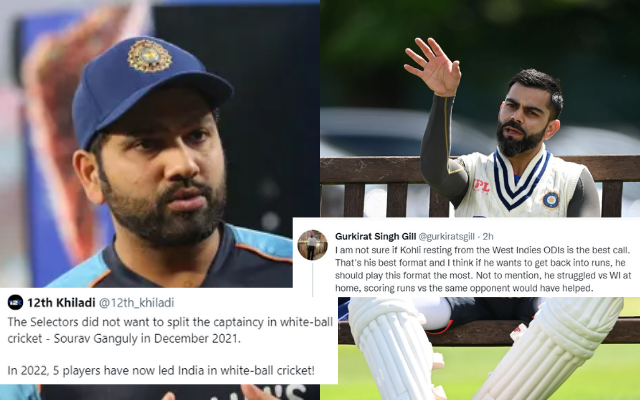 It was shocking for cricket fans when they came to know that Virat and Rohit have been rested for the ODI series because both of them haven’t played much cricket in the last few weeks. Virat has just played one Test match post IPL 2022. While Rohit hasn’t played any game since IPL 2022.

Fans trolled both Virat Kohli and Rohit Sharma for taking more rest than playing matches for the Indian team. Both Virat and Rohit skipped the T20I series against South Africa. They were also not the part of T20I series in Ireland. Fans feel that both of them should be taking the matches of the Indian team seriously.

When Kohli was captain he used to captain all overseas games and rest vs sl wi at home . That's what any good professional will do .

Why resting our major players time and again? It’s like you are asking them to play to get a break from all the rest. Virat and Rohit need long time in the middle. ODIs are perfect setting for that. They can ease their way in 🤦‍♂️ https://t.co/Dut9EzT5Dx

There's still 1 real 'captain' though across formats. It's just that he's in the dressing room and not in the XI. You see him in PCs before and after the series, speak strategy, combination and everything else. And the team is being picked on those lines only. https://t.co/tFBB7cUnvr

Tired of B and C team playing while A team rested mostly. Losing interest in the format.

Had a month break after IPL. Then 6 games in England. Then rest again?

I am not sure if Kohli resting from the West Indies ODIs is the best call. That's his best format and I think if he wants to get back into runs, he should play this format the most. Not to mention, he struggled vs WI at home, scoring runs vs the same opponent would have helped.

Why on earth does Rohit Sharma need rest ? 3 ODIs & 3 T20s vs England is all that his body can sustain ? I'm a huge Rohit fan but he's missing far too much of international cricket which does no good to the team. Can play 14 high intensity IPL matches but not 2 series in a row ?? https://t.co/hKq7sfVpM8

Only pant deserves rest.
Kohli and Bumrah got break during SA series.
Don't know why rohit was given rest again🤦🤦

Yes Rohit Sharma need some rest as he would be very tired of England tour with the number of day he played 👏👏#IndianCricketTeam #CricketTwitter #BCCI https://t.co/IWrW4PGIEM

Absolutely shameful from BCCI. 8 captains in 4 months. Rohit just now rested Vs SA and didn’t play test. And now he wants to rest again🤣 When Kohli and Dhoni were captain – did they take rest every 1-2 series? Hope they understand the value of Kohli fitness now…#ViratKohli𓃵 pic.twitter.com/uG3tJMUmNU

Sack Chetan Sharma bc. I know both Rohit and Virat wouldn't have asked for rest in ODIs. It's already boring format out of 3, and who is going to watch without Rohit and Virat playing for India? https://t.co/mGIdC54ACx