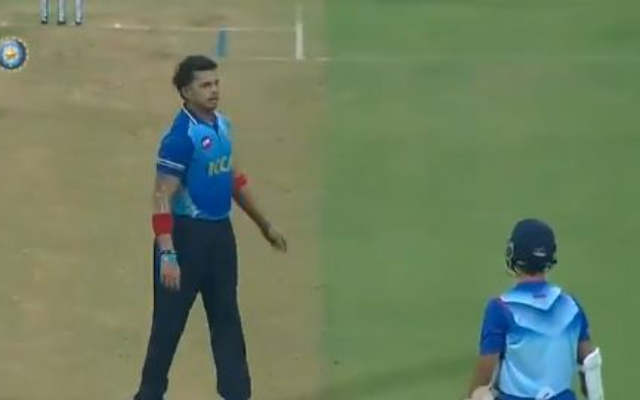 A bit of drama unfolded in the Wednesday encounter between Mumbai and Kerala as Yashasvi Jaiswal tonked Sreesanth over midwicket right after the two time World cup winning player tried to sledge him. The Syed Mushtaq Ali Trophy saw the return of Sreesanth as he turned up for the Kerala state side captained by Sanju Samson after a long hiatus of 8 years.

It was both Mumbai and Kerala’s second group of the season where the two sides faced each other at the Wankhede Stadium in Mumbai. Kerala skipper Sanju Samson after winning the toss elected to bowl first, Mumbai batting first posted a humungous total of 196 at the end of 20 overs with valuable contributions from Yashasvi Jaiswal and Aditya Tare who notched up a 88 run stand for the opening wicket.

In reply, Kerala’s opening batsman Mohammed Azharuddeen stole the show as he blasted his way off to 137 runs in just 54 deliveries helping Kerala finish off the chase in merely 15.5 overs. With this win, Kerala makes it two of out two wins whereas Mumbai have lost both the matches they have played so far.

Yashasvi Jaiswal Answers Back Sreesanth With Two Back To Back Sixes

It happened during the 6th over of the first innings when Sreesanth was bowling to Yashasvi Jaiswal. The fast bowler first bowled a short of good length delivery swinging away from Jasiwal to which the youngster tried to dance down the track and hit him over covers but Jaiswal just couldn’t get his bat on the ball. Looking at Jaiswal’s audacity, Sreesanth walked up to him to give a typical fast bowler’s stare.

Jaiswal not being too bothered by Jaiswal’s sledge, launched the following delivery into the stands at deep mid-wicket. The aftermath was even more dreadful for Sreesanth as Jaiswal then hit him for 17 runs in the next 5 deliveries of the over.