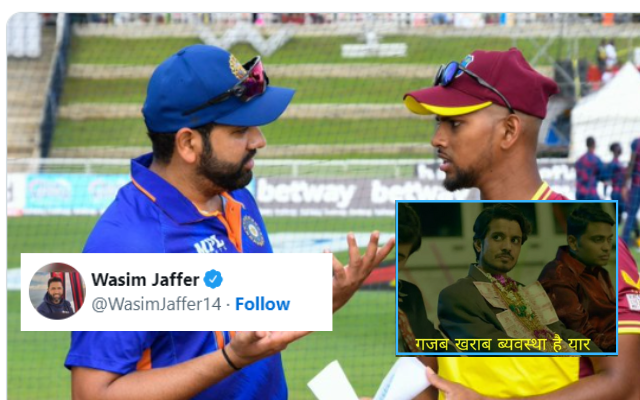 The start of the second T20I between West Indies and India, which will take place later today, August 1 at Warner Park in St Kitts, has been delayed by two hours. It will now begin at 12.30 pm local time (10 pm IST). The change in timing is due to a significant delay in crucial team luggage arriving in St Kitts from Trinidad. Heading into the second T20I, the visitors are leading 1-0 in the five-match T20I series.

Cricket West Indies issued a statement announcing the delay to start the second T20I. They stated that the delay was due to the late arrival of the cricketers’ luggage. The board expressed their regret to the fans and also to all the stakeholders for the inconvenience caused due to the change in timings.

“Due to circumstances beyond CWI’s control, there have been significant delays in crucial team luggage arriving into St Kitts from Trinidad. As a result, today’s 2nd Goldmedal T20 Cup match is due to start at 12:30 pm (11:30 am Jamaica/10 pm India). CWI regrets any inconvenience caused to our valued fans, sponsors, broadcast partners, and all other stakeholders.” wrote CWI in their statement.

Following Cricket West Indies’ statement informing the reason for to delay in the start of the second T20I, social media was flooded with tweets by fans about the incident. It sparked a meme fest, with the Twitteratti mocking the board and the airlines.

Let’s take a look at how the fans reacted to the start of the second T20I getting delayed:

Today's game is delayed by two hours because the luggage hasn't arrived. True.

The middle-class me who never leaves the airport without the luggage: https://t.co/uOMdvi3PE0 pic.twitter.com/ggJJYTOK1d

Match delayed because team luggage didn’t reach. This is weird, we are talking about international cricket here.

Legends: Match delayed due to rain

Wow, that's something new to hear. A match getting delayed due to luggage not having arrived. #INDvWI #WIvIND

India secures a comprehensive win in the first T20I

Team India registered a convincing win in the first T20I against West Indies on Friday at the Brian Lara Stadium in Trinidad. They won the match by 68 wickets, as the West Indies batter failed to counter India’s sharp bowling.

Earlier in the match, India put on 190 runs on the board, on the back of Rohit Sharma’s fifty and Dinesh Karthik’s unbeaten 41. In response, Arshdeep Singh, Ravichandran Ashwin, and Ravi Bishnoi picked a couple of wickets each to restrict West Indies to 122 runs.