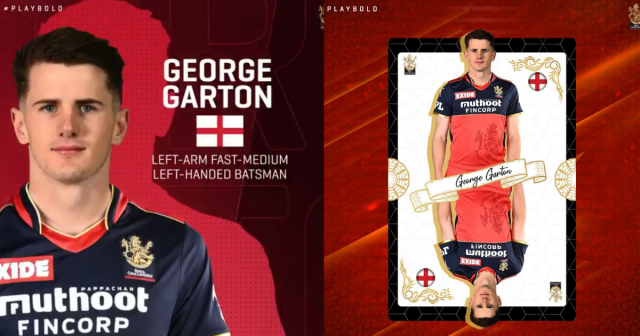 Royal Challengers Bangalore (RCB) have signed yet another player in their squad for the second phase of Indian Premier League (IPL) 2021 which will begin in UAE from September 19. The Virat Kohli-led side has roped England’s all-rounder George Garton. Notably with the inclusion of Garton the overseas quota of RCB is completed.

Royal Challengers Bangalore (RCB) announced the addition of new members through their social media posts. RCB said, “🔊ANNOUNCEMENT 🔊 Talented all-rounder from England, George Garton, will join the RCB family for the rest of #IPL2021. He completes our overseas players quota for the season. 🤩#PlayBold #WeAreChallengers #NowAChallenger.”

Talented all-rounder from England, George Garton, will join the RCB family for the rest of #IPL2021. He completes our overseas players quota for the season. 🤩#PlayBold #WeAreChallengers #NowAChallenger pic.twitter.com/XQgIxWyFva

In this article, we will take a look at three facts about Royal Challengers Bangalore’s latest addition George Garton

The 24-year-old England all-rounder made his first-class debut in SUSSEX vs LEEDS/BRADFORD MCCU game in 2016. His List A Debut came in the Sussex vs Essex match on June 06, 2016. Meanwhile, he played his first T20 match in SUSSEX vs GLOUCESTERSHIRE encounter in the same year. Notably, his debut matches were not very impressive, he failed to leave a big impact playing his first List A, First Class, and T20 match.

George Garton was part of England’s Under-19 World Cup team in 2016 which took place in Bangladesh. Notably, that was the eleventh edition of the Under-19 Cricket World Cup. England didn’t have a good performance in that edition of the World Cup. Also, the final match of the tournament was between India and West Indies. And West Indies came out victorious in that battle to become the World Champions.

#1. George Garton was once added to England’s Test squad for Ashes and ODI squad against Sri Lanka

In November 2017 Garton was added to England’s Test squad for the 2017–18 Ashes series. Notably, George Garton was included in the England team as cover for pacer Jake Ball during pre-Test tour matches. However, Garton returned to England Lion’s (England A) side when Jake Ball recovered. Team Australia dominated that Ashes series as they defeated England by 4-0 in the five-match Test series.

The 24-year-old received his maiden One Day International (ODI) call-up to the England cricket team in June 2021 in the series against Sri Lanka. Notably, Olly stone was all set to join the team. However, he was ruled out for the rest of the season with a stress fracture to his back. This led George Garton to get his England call up. However, he was not given a chance to make his international debut. Also, England won the 3-match ODI series against Sri Lanka by 2–0.