Indian skipper Virat Kohli is going through a rough patch in Test cricket at the moment. He last hit a Test ton back in 2019 and since then has not been in the best of form. In the ongoing Test series against England as well, Kohli has found it tough to get himself accustomed to the English conditions. In the ongoing third Test at Headingley, Kohli yet again was dismissed early by Anderson for just 7 off 17 balls. This is the second time in the series that Anderson has dismissed the Indian skipper.

Meanwhile, in this article, we take a look at the names of the bowlers who have dismissed Virat Kohli most times in Test cricket.

Bowlers With Most Virat Kohli Dismissals In Test Cricket 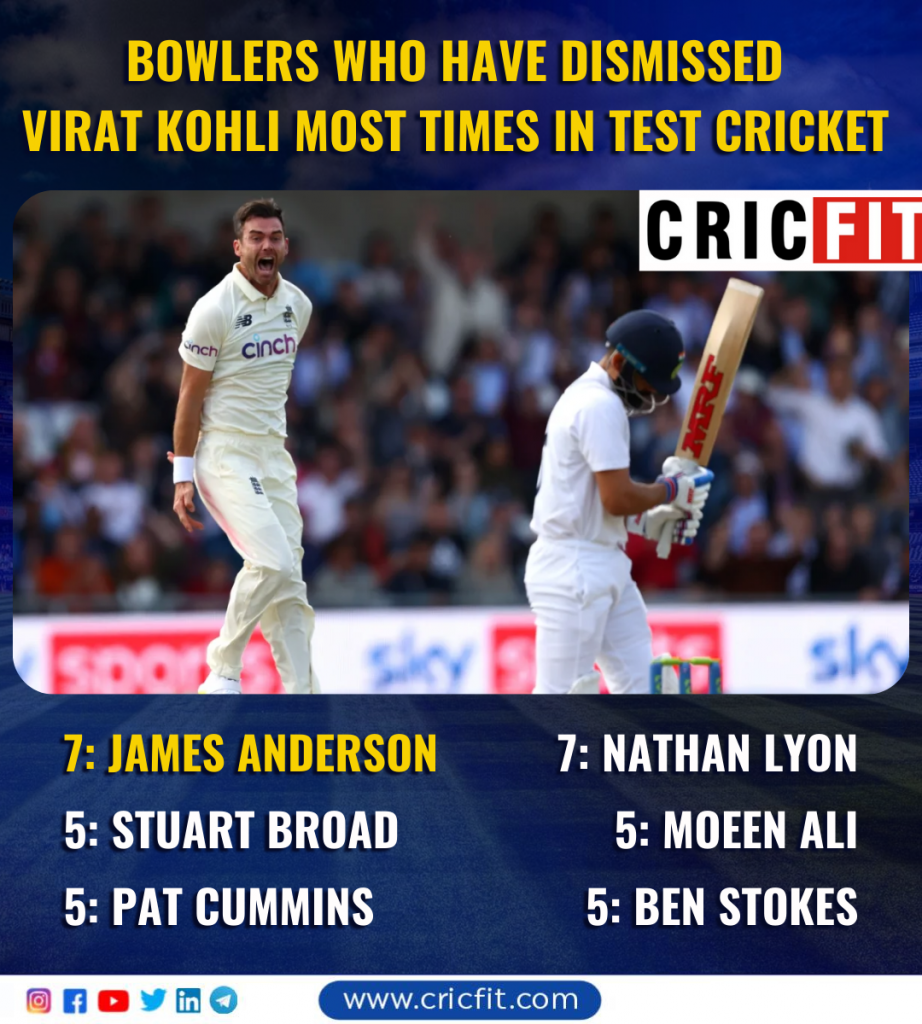 The veteran England pacer James Anderson dismissed Kohli for the seventh time in Test cricket. In the recent dismissal, he set the Indian skipper up perfectly for his dismissal. After bowling a few incoming deliveries, he deliberately bowled an outswinger by pushing the ball just before release so that it moves away after pitching. The ball was bowled full at Kohli which made him play at the ball and Jos Buttler completed an easy catch behind the stumps.

Like Anderson, Nathan Lyon has also dismissed Kohli seven times in Test cricket. He has troubled the Indian skipper both in India and down under. Getting him bowled caught at short leg are the two most in which Lyon has dismissed Kohli. Against spinners,  Kohli has a problem of leaving a big gap between bat and ball which has been time and again exposed by Lyon and also Moeen Ali.

Broad who has been ruled out of the series has dismissed Kohli five times in Test cricket. The battle between Kohli and Broad has been enticing over the years. Both have great respect for each other as well being counterparts and key players of their national teams.

Moeen Ali and Nathan Lyon have been the best overseas spinners coming up against Virat Kohli. The 2014 England tour saw Ali troubling Kohli from over the wicket. He used the rough created by the bowlers to get through the defence of Kohli. In this series, however, the England off-spinner is yet to dismiss the Indian skipper.

Australian pacer Pat Cummins is the next bowler on the list to dismiss Kohli the most number of times. He has dismissed the right-hander five times. Like Anderson, he also troubled the Indian skipper outside his off stump. He got the wicket of Kohli in the famous Adelaide test where the side was bowled out for just 36.

Talking about Stokes, he is on an indefinite break from cricket and has not opened upon his return as yet. He will miss the IPL in UAE and possibly the Ashes series in Australia as well.

Also Read: Hanuma Vihari Trends On Twitter After Cheteshwar Pujara Gets Out Cheaply