Indian cricketer Virat Kohli has been arguably been the best batter in world cricket in the last decade. He has achieved several records in the game and has led India to numerous historic wins. The right-handed batter has scored over 20000 International runs and has 70 centuries to his name across formats. His numbers are a testament to his talent.

With his batting exploits and off-field persona, Virat Kohli has earned a massive fan following all over the world. The Indian cricketer appears to be very aggressive on the field, however, he is even more of a funny character off the field. Some of his teammates have spilled beans on the pranks that Virat Kohli pulls off in the dressing room. Meanwhile, they have also shared a few of his unknown secrets.

In this article, we take a look at the five secrets about Virat Kohli, spilled by others.

Indian cricketers Hardik Pandya and KL Rahul appeared on the Koffee with Karan show as the guests in the 2018-19 season. On the show, they revealed many secrets about themselves and their teammates. The host Karan Johar asked the duo who was the most romantic player in the Indian team. Both Hardik Pandya and KL Rahul replied “Virat Kohli”. The duo also revealed the veteran batter is the biggest prankster in the group.

Indian cricketer Virat Kohli and Anushka Sharma got married in 2017 in Italy. The couple wanted to keep the wedding ceremony private and tried to keep it a secret from the fans and the media. They even changed their names to make arrangements for their wedding ceremony.

In an interview with the magazine Vogue, Anushka Sharma spoke about her wedding arrangements and how they managed it to keep a secret. She revealed that the couple used fake names while speaking to the organizers.

“We even used fake names while talking to the caterer; I think Virat’s was Rahul.”, she said. 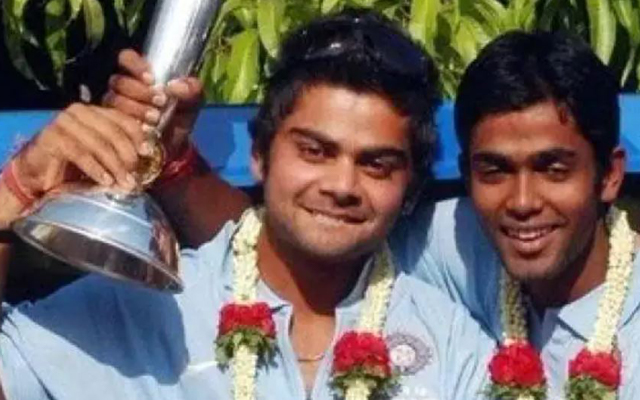 Virat Kohli has several nicknames including the ones bestowed by his fans. However, not many know that the Indian cricketer was called “Cheeku-Motu” by his teammates during his younger playing days. Kohli’s former teammate Tanmay Srivastava, in an interview with the Indian Express, revealed the story.

“We used to call him cheeku-motu in the team.”, said Tanmay.

“But in 2012 he came up with a plan where he began looking after his fitness. He began to follow a strict diet. He was determined to lose his weight, and wanted to shed few kilos.”, he added.

Former cricketer AB De Villiers shares a special bond with Virat Kohli. The two have spent a lot of time together in the Royal Challengers Bangalore team and have gotten closer. AB De Villiers often speaks about Kohli and the respect that he has for the Indian cricketer.

In one of the interviews, AB De Villiers expressed that he is scared to reveal much to Virat Kohli, as he would buy whatever AB De Villiers wanted. The wicket-keeper batter said,

“He’s ridiculous, man. I told him I like coffee the other day. Now I’m getting an espresso machine – he’s ordered on Amazon. It’s being delivered tomorrow.”

Pradeep Sangwan has played a lot of cricket with Virat Kohli. In one of the interviews, he revealed how the Indian batter’s behavior completely changes, in front of his wife Anushka Sharma. Narrating an incident, when he met Virat Kohli recently, Pradeep Sangwan said to the Indian Express,

“I met him recently in some function, mujhe laga change hua hoga. As soon as Anushka crossed over to other side of the room, bhai chalu ho jaate (with his pranks). The moment his wife returned, he became a nice boy. As soon as his wife went to meet someone, Delhi ka Virat Kohli was back to talking in the same old style.”