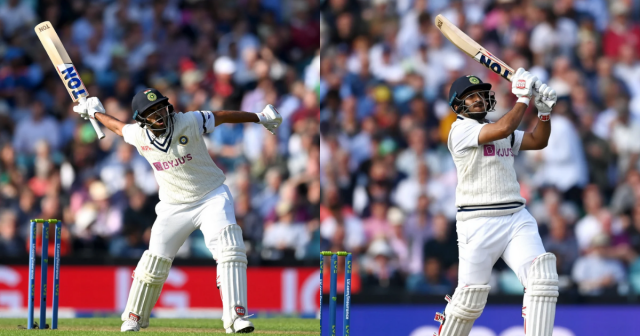 Shardul Thakur is a fast bowler with the ability to swing the ball away from right-handed batsmen. Shardul represents Chennai Super Kings (CSK in the Indian Premier League (IPL).

In the ongoing India tour of England, Shardul scored his second Test fifty to take India to a respectable total on day 1 of the fourth Test at The Oval. In the process, he and Umesh Yadav put on a 63-run partnership for the eighth wicket. After the hosts had India nearly on the floor at 127/7 after the wicket of Rishabh Pant, Shardul and Umesh began a counter-attack that pushed England captain Joe Root to think hard.

Shardul Thakur now has the fastest ever Test fifty in England (by balls).

In his 36 balls 57, Shardul Thakur smashed seven fours and three sixes to keep India in the game. He ended up being the top scorer for India in the innings.

Here are some fascinating facts about the Mumbai pacer:

Shardul Thakur was born in Palghar, Maharashtra, however, he opted to play domestic cricket for Mumbai instead of Maharashtra and made his debut in the 2012-13 season under the captaincy of Rohit Sharma.

#3 Highest wicket-taker in a Ranji season

In the 2013-14 Ranji Trophy also, he was the team’s second-highest wicket-taker.

The kitbags and trains, like with many other cricketers, convey a colourful tale. He grew up in Palghar, a town 87 kilometers north of Mumbai, and spent his early cricketing years carrying his kitbag into the city on early-morning trains. Shardul Thakur used to travel for over 7 hours back and forth, working mightily to make a living during his teen years.

#1. When Shardul Thakur sparked controversy opting for the No.10 jersey

After debuting with the No. 10 jersey, Shardul Thakur sparked a controversy. Fans were annoyed as it was Sachin Tendulkar’s jersey number, and he received a lot of flak as a result. Shardul had selected No.10 because it was the month of his birth. Later on, he changed it to 54.