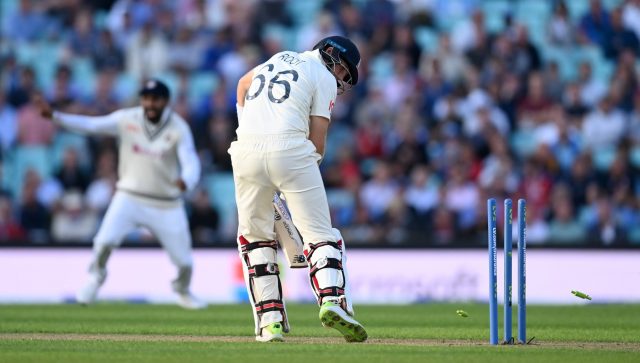 It was a superb delivery by Umesh though. It pitched back of a length around off and came in with the angle to breach Joe Root’s defence. The ball hits the top of the off-stump and Umesh is pumped up as he jumps and punches the air in joy.

Delivery of the series by Umesh Yadav? What a nut!#ENGvIND

Umesh gets the big first, who has been a nightmare for India in the last three Tests holding England’s batting tightly with three consecutive centuries in three Tests. Umesh Yadav has justified his selection with a peach of a delivery that will help the visitors breathe.

MASSIVE moment in the day as Umesh Yadav sneaks one past Root’s forward defence to disturb the woodwork.

After another failure from the batters, Indian bowlers produced some quality bowling to put the visitors back in the game. Batting first, India managed only 191 runs, thanks to some exemplary hitting from Shardul Thakur, who scored 57 off 36 balls including three sixes.

Shardul Thakur's entertaining knock comes to an end on 57.

In reply, Jasprit Bumrah put England right on top removing both the English openers to have the hosts at 6/2. Joe Root and Dawid Malan tried to bail out England but Umesh Yadav produced an absolute beauty to get rid of Root (21) to put India back right in front.