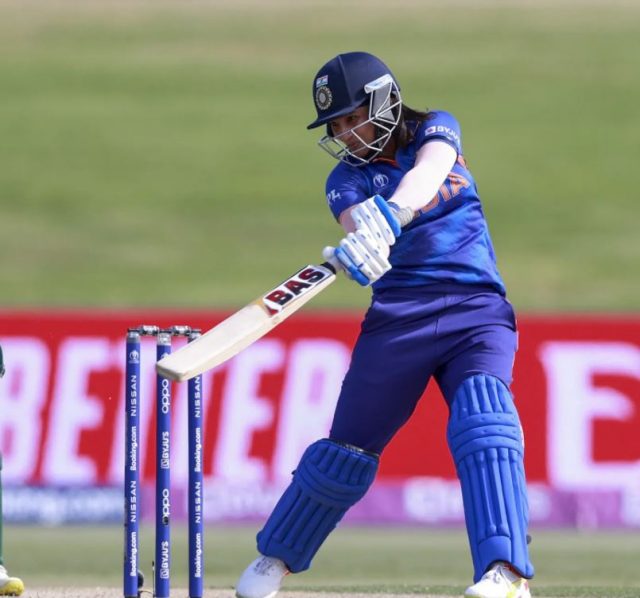 Sneh Rana and Pooja Vastrakar led India’s comeback against Pakistan in the ongoing match at the Bay Oval, Mount Maunganui. This is the opening match for the arch-rivals in the ICC Women’s World Cup 2022.

The Indian team was in trouble having lost their top six for just 114 runs.  However, Pooja Vastrakar got together with Sneh Rana to stabilize the Indian innings. The duo is playing their first ICC Women’s World Cup match.

Pooja Vastrakar was dismissed in the final over of the innings, for 67 runs off 59 balls, including eight boundaries. Sneh Rana remained not out for 53 runs off 48 deliveries, slamming four boundaries. This is her first fifty in One-day Internationals.

Earlier in the day, Indian skipper, Mithali Raj won the loss and opted to bat. India lost Shafali Verma early, with just 4 runs on the board. However, Deepti Sharma and Smriti Mandhana added 92 runs together, before India suffered a batting collapse.

The Mithali Raj-led side, finished the innings at 244/7, on the back of Pooja and Sneh’s counter-attacking fifties. Nida Dar and Nashra Sandhu were the pick of the bowlers for Pakistan, as they picked two wickets each.

Let’s take a look at how the fans reacted to Sneh Rana and Pooja Vastrakar’s partnership:

Commentator Harsha Bhogle feels Pooja Vastrakar and Sneh Rana’s stand has given India an opportunity to win this match. He tweeted, “Sneh Rana and Pooja Vastrakara have given India a chance in this game. Seemed curtains when Mithali was out and it was 114-6. Should be a really good game.”

Sneh Rana and Pooja Vastrakar have given India a chance in this game. Seemed curtains when Mithali was out and it was 114-6. Should be a really good game

Smriti Mandhana with 52, Deepti Sharma with 40

Superb 67 by World Cup debutant Pooja Vastrakar. She and Sneh Rana have put India into strong position putting on 122 for the 7th https://t.co/yhDqb2V9r9 one stage India were 114-6. Pressure entirely on Pak now #WWC2022

Rana and Vastrakar were at opposite ends in Challenger Trophy finals, leading India A and D, respectively. Both were very eloquent after the match, too. The clarity of thought, streetsmart and leadership skills that were there, shows on the big stage. #YoungbutExperienced #CWC22

Brilliant half centuries these from Vastrakar and Rana… Runs on board now, top fight back by our #WomenInBlue #IndvPak https://t.co/HTIPRjjxTx