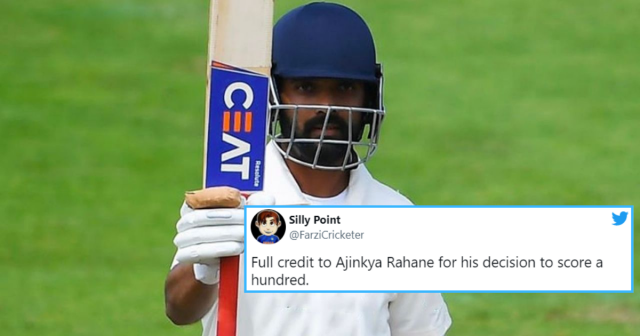 On Day 1 of the Ranji Trophy 2022, veteran batter Ajinkya Rahane blasted a century for Mumbai against Saurashtra. At the end of day’s play, Rahane was unbeaten at 108 runs with 14 fours and 2 sixes. Rahane along with Sarfraz Khan added unbeaten 219 runs for the fourth wicket.

After a string of lacklustre performances with the bat, Ajinkya Rahane’s place in the Indian Test team has been questioned by cricket experts and fans since past few months. As a senior player, Rahane’s average of 20.83 in 2021, was a major source of concern for the Indian team in Test Cricket. Rahane was also relieved of his Test vice-captaincy duties ahead of India’s tour of South Africa 2021-22, and Rohit Sharma was appointed in his place.

Many have assumed that Ajinkya Rahane’s opportunity in South Africa was his last, and that he would no longer be a member of India’s Test squad. However, this first-class century has come at the right time and might earn him a call-up for the upcoming Test series against Sri Lanka in March. This innings might have also helped him regain some confidence with the bat.

Here’s How Twitter Reacted To Ajinkya Rahane coming back to form:

Hundred for Ajinkya Rahane, 100* from 211 balls including 14 fours and 2 sixes against Saurashtra, he was under lots of pressure and delivered at the right time for Mumbai.#Rahane #RanjiTrophy #RanjiTrophy2022 pic.twitter.com/FoByKZehvm

44-3 and Jinks gets a 100 for #Mumbai ! Typical @ajinkyarahane88 under pressure knock 👏🏻 Well played . #RanjiTrophy

A century for Rahane. 101 off 215 balls. A bit of a grind and no real fluency there but it doesn't look like batting was easy.

Ajinkya Rahane gets to a 100. Has played a total of two false shots in the day so far. Authoritative in strokeplay and running between wickets. Got to 99 with a six off Jadeja. #RanjiTrophy @sportstarweb pic.twitter.com/LbKkCd3Rtq

Ajinkya Rahane holds on to his Test spot then? Hundred from No.4 in the Ranji Trophy.#RanjiTrophy2022

Ajinkya Rahane scores 100 against saurastra in the #RanjiTrophy.
Much needed knock given the situation he is in. pic.twitter.com/x3RBqGvX1S

Start of our premier domestic tournament, our red ball batter scoring a patient, yet a strokefilled 💯 on Day 1 in search of some much needed form.@amolmuzumdar11 & @MumbaiCricAssoc
will surely benefit from your presence.

CENTURY for Ajinkya Rahane. His first in #RanjiTrophy since 2013. And its against the defending champions Saurashtra at Motera.

Full credit to Ajinkya Rahane for his decision to score a hundred.

Cheteshwar Pujara, who is in the opposite team of Rahane in the ongoing match, would also be hoping to score some runs. Earlier this month, BCCI president Sourav Ganguly, had stated that Rahane and Pujara should prove themselves in the Ranji Trophy.

“Yeah, they are very good players. Hopefully, they will go back to Ranji Trophy and score a lot of runs, which I am sure they will.”, Ganguly had said during an interview with Sportstar.