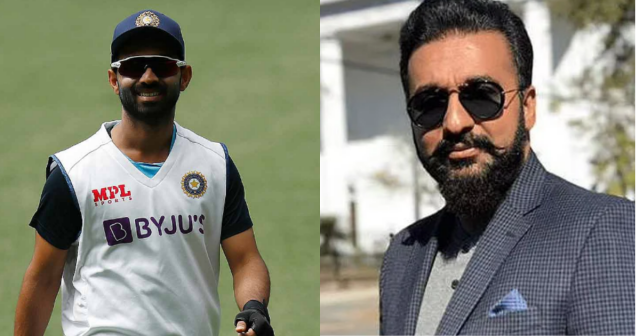 Team India’s Test vice-captain Ajinkya Rahane has been severely criticised on Twitter for a 2012 tweet where he praised business tycoon Raj Kundra, who was recently arrested in relation to alleged pornography.

Incidentally, the Mumbai Police’s crime branch has named Shilpa Shetty’s husband as the key conspirator in this case. The police said they have sufficient evidence against him. Ever since the news of his arrest broke, social media has been buzzing with all kinds of reactions.

Team India cricketer Ajinkya Rahane also found himself amidst all these for a Twitter exchange he had with Raj in 2012. In his post, Rahane had appreciated Raj and wrote:

@TheRajKundra Sir you are doing a Great job..

Raj Kundra had also replied to the tweet of Ajinkya Rahane saying:

‘Thanks so much. You must come and see it live’.

@TheRajKundra yeah I wil for sure sir:)

Back in that time, Ajinkya Rahane was associated with Rajasthan Royals, co-owned by Raj Kundra in the Indian Premier League (IPL). Currently, people are trolling the middle-order batsman by adding funny reactions and comments while quoting the tweet. Many users have posted stills and clips from Bollywood movies to describe what Rahane would be feeling about Raj’s arrest.

The veteran batsman missed the practice match owing to swelling around his left hamstring. The BCCI, however, is expected to recover in time and be available for selection for the first Test against England, which starts on August 4 in Nottingham.

“Vice-captain Ajinkya Rahane has mild swelling around his left upper hamstring. This has been addressed by an injection. He is not available for the three-day first-class warm-up game. The BCCI Medical Team is monitoring him, and he is expected to fully recover well in time for the first Test against England starting from 4th August at Nottingham,” BCCI said in a statement.

Skipper Virat Kohli also missed the warm-up game due to some stiffness in his back. The BCCI medical team has advised him to rest to recover full fitness.