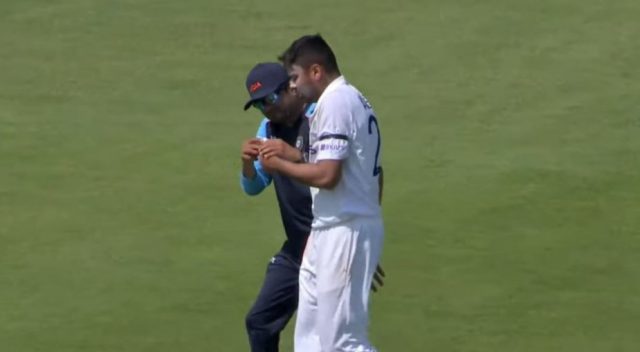 Indian fast bowler Avesh Khan has injured himself while playing in the three-day first-class match. He was playing for County Select XI against India when he hurt a finger on his left hand.

Avesh Khan, who plays for Delhi Capitals in the IPL, was added to County Select’s playing XI along with Washington Sundar. It was done in order to ensure some match practice for the two youngsters. Unfortunately for Avesh, the match might have turned sour very early on.

He was bowling to Hanuma Vihari in the 35th over when the unfortunate incident happened. A full delivery was driven down the ground by Vihari and in his quest to stop the ball, Avesh Khan ended up injuring his thumb. Although the nature of the injury hasn’t been confirmed, it looked like a dislocated thumb to the naked eye.

Virat Kohli and Ajinkya Rahane were rested for the first-class practice match. Therefore, the onus was on the rest of the batsmen to have a good outing before heading to Trent Bridge for the first Test against England.

Unfortunately, the top 4 once again failed to impress. Taking over the captaincy for the match, Rohit Sharma fell to a rather innocuous delivery. He went for his trademark pull shot which brought about his downfall for 9. Mayank Agarwal, who looked good for a while, was exposed to the swinging delivery once again.

Brilliant from @TrentBridge's Lyndon James who picks up his second.

Under-fire Cheteshwar Pujara spent some time out in the middle but fell for 21 before Hanuma Vihari was dismissed soon after. The aforementioned batsmen got starts but failed to carry on. It will be a cause of concern if they fail to convert starts into big scores against England.

In the latest update, India was 141/4 with KL Rahul looking good to score a half-century in the company of Ravindra Jadeja.