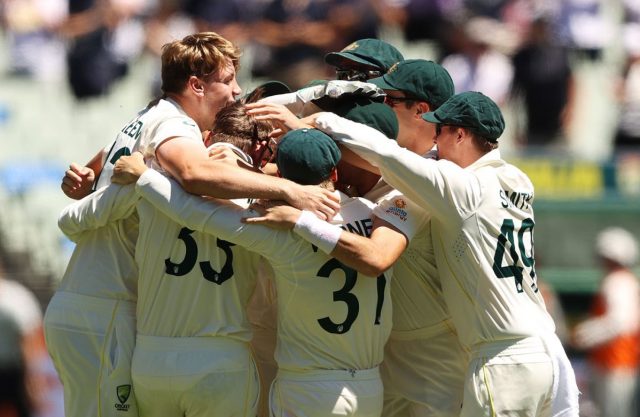 Australia thrashed England by an innings and 14 runs to retain the Ashes urn with two matches still to go. Riding on debutant’s 6/7, the home side bowled out Joe Root & Co for a mere 68 runs, with only two batters managing to cross the single-digit mark. From even odds to underdogs, to dark horses to getting properly hammered, things really couldn’t have gone worse for the visiting side.

England came into the third day staring at defeat already losing their top-order including nightwatchman Jack Leech. Joe Root and Ben Stokes were their only hopes but once Boland got Root and Mitchell Starc got the better of Mitchell Starc, it was only time that the English team would crumble down.

All they could manage was 68 runs in the second innings in reply to Australia’s first innings total of 267 runs. The Australian pacers have been absolutely sensational, and the English batsmen have clearly made them look unplayable. And the story is led by a debutant, who at 32 had perhaps given on the Test dream, only to find himself steamrolling his side on the way to the urn, at home.

Scott Boland, who will remember this day for the rest of his life, stated that things happened really quick for him in this Test match.

“I’m speechless as well, had no idea it would be over so soon. Those are my best-ever figures, nothing has happened this quickly before. They (the crowd) were amazing, going down there (near the boundary) gave me a real buzz,” Boland said after the match.

Meanwhile, Twitter was buzzing with fans praising the quality the Aussies possess .

Here are some reactions:

England nowhere near good enough .. they will know that .. but seeing a 32 yr old on debut on his home turf with the Crowd going berserk is what makes Sport so special .. Well done Australia .. Far too good for England .. #Ashes @FoxCricket

The #Ashes have been won in 11 days and one session.

What it must feel like to be Scott Boland right now. Thousands stand and cheer for you wherever you go around the MCG & you get to lead an Ashes-winning Australian team off the field on your home-ground and this is just your third morning as a Test cricketer #Ashes pic.twitter.com/P2az8p4vN2

How awful and lonely it must feel like to be James Anderson right now. Have to feel for him. His batters have let him down Yet again #Ashes pic.twitter.com/xUlUg0LgpH

Test debut at 32, only the second male Indigenous to play Tests for Australia and what a dream debut for Scot Boland.
Fast bowling of the highest class.
6/7 with the home crowd behind him cheering every ball. Fascinating.
Congratulations to the Aussies for retaining the #Ashes pic.twitter.com/LbRhNVcSI3

WHAT AN INNINGS! Australia wins by an innings and 14 runs. That is what we call an annihilation. And how good is the depth in our bowling unit! The Ashes remains ours. 🇦🇺 #Ashes

The lights have gone out on Joe Root's press conference, which is about as good a piece of poetic symmetry as I think you'll find. Poor fella. #ashes

I thought I was joking last night when I said that England could still lose by an innings, but there has been a revision, I was not joking #Ashes

The penultimate Test between England and Australia commences on January 5 at the Sydney Cricket Ground.