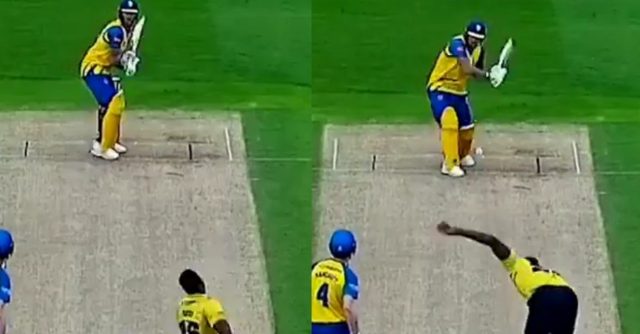 England all-rounder Ben Stokes recently took Carlos Brathwaite to the cleaners in a Vitality Blast game. Stokes exacted revenge on the West Indian following the bashing he received in the 2016 T20 World Cup.

Currently, Stokes is on a path back to match-fitness through playing for the Durham side in the T20 Blast. He is slowly coming into his own following good performances with the bat. In the most recent game against Warwickshire, Ben Stokes ended with stellar figures of 4/27 with the ball after scoring a quickfire 35 off 20 balls in the first innings. Consequently, he won the Player of the Match award and will look to continue the climb back to international cricket.

Stokesy sends it into the stands 6⃣

During the aforementioned match, Ben Stokes came face to face with his former tormentor Carlos Brathwaite. The West Indian had demolished Stokes’ bowling in the famous 2016 T20 World Cup final at the Eden Gardens.

He saw this as an opportunity to return a few punches. And return he did. Stokes hammered 6,4,0,6 off Brathwaite’s over and the fans quickly noticed how the tables had turned. After that, he couldn’t score in the over but the tone had been set for Durham’s first innings.

The match ended with Durham cruising to a 34-run victory over Warwickshire. Skipper Cameron Bancroft smacked a 45-ball 60 which helped the Durham side reach 164/8 in their 20 overs. Warwickshire never looked settled in their chase as they lost wickets at regular intervals, eventually being bundled out for 130 in 18.3 overs. Stokes will next be seen against Northamptonshire on June 30.

Here are some reactions after Ben Stokes completed the revenge:

Ben Stokes smashed 6,4,0,6 in the 6th over against Carlos Brathwaite in T20 Blast..#T20Blast #benstokes pic.twitter.com/hCClGnSnjP

Ben Stokes smashed 6,4,0,6 in the 6th over against Carlos Brathwaite in #T20Blast

It's ben stokes vs carlos brathwaite again, this time Ben Stokes smashed 6,4,0,6 in the 6th over against Carlos Brathwaite in #T20Blast

Ben Stokes smashed 6,4,0,6 in the 6th over against Carlos Brathwaite in #T20Blast
Stokes Back 🔙