Rajasthan Royals all-rounder Ben Stokes left for UK earlier today. He will get his finger operated in Leeds after he reaches there. Stokes was ruled out of the IPL after injuring his left index finger in Royals opening match against Punjab Kings. he took a good catch later in the game but was subsequently ruled out of the season. The Royals are already missing Jofra Archer who is recovering from his elbow injury. Stokes’ absence comes as another big blow to the Royals.

Taking to Twitter, Rajasthan Royals wrote, “Bye Ben. The all-rounder flew back home last night after a scan revealed that he’ll have to undergo surgery on his finger. Speedy recovery, champ.” 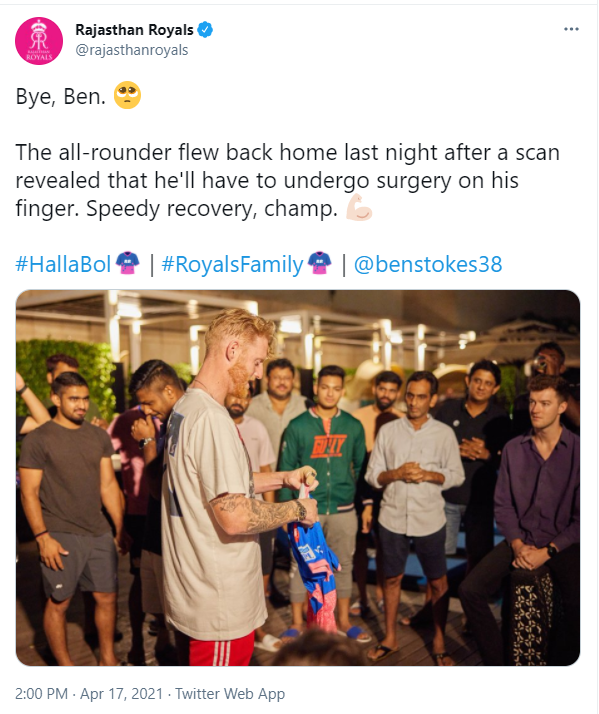 The ECB has said in a statement that the all-rounder will travel back to Leeds on Monday after which he will undergo a surgery. The board further said that he is out of action for 12 weeks. Stokes’ replacement is yet to be confirmed by the Royals.

Meanwhile, after losing their first game, Rajasthan Royals made a comeback to win their second game against Delhi Capitals. Chasing 148 to win David Miller scored 62 and Chris Morris’ cameo (36 off 18 balls) helped the Royals earn their first victory of the season. The Royals were reduced to 42/5 inside the first 10 overs chasing that score.

With 27 needed off the final two overs, Chris Morris stepped up to the occasion to take his side over the line with two balls to spare. He hit two sixes off Kagiso Rabada’s penultimate over and accumulated 15 runs from it.

Royals will take on Chennai Super Kings in their next game. Ben Stokes and Jofra Archer will not be available for them in the game. While Stokes is ruled out of the season, Archer’s availability is not confirmed yet by the management. All teams have played at least two games so far in the season within the first eight games played.