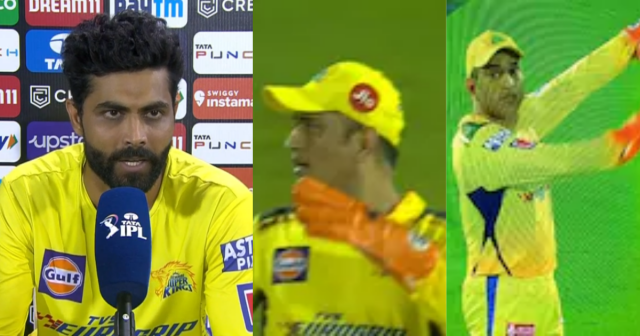 Chennai Super Kings (CSK) captain Ravindra Jadeja recently opened up about the role of MS Dhoni on the field. Jadeja explained that CSK needs good fielders as boundary riders. Hence he himself stands in those positions.

From there, it’s not easy to communicate with other fielders. Therefore MS Dhoni helps Jadeja in the field setting. Incidentally, there has been a lot of speculation about Dhoni marshalling the troops despite Ravindra Jadeja’s presence.

The ace all-rounder has finally offered a justification after their game against Punjab Kings. Jadeja said:

“The last match (against LSG) was a high-scoring game so there are chances of catches at deep mid-wicket and our thinking was that it would be better a good fielder had to be there. So, I was not able to communicate with the bowlers much.”

“But Mahi Bhai gives inputs, that is good, he is so experienced so we don’t have to look anywhere else for advice. He’s a legend and has been captaining for so many years, that experience is there in our dressing room only so we are lucky to have his advice.”

However, MS Dhoni has received criticism from former cricketers for taking the on-field decisions despite leaving captaincy. People have opined that this is a hindrance to Jadeja’s growth as a captain.

Harbhajan Singh said on Star Sports: “I feel that MS Dhoni is still captain of the team. When I look at Jadeja, he is fielding outside the ring. By doing that you won’t be able to control too many things but he has given headache to MS Dhoni to look after the field setting and everything.”

Ajay Jadeja said on Cricbuzz: “He (Ravindra Jadeja) was standing right there and you (Dhoni) continued to run the whole game. See, Dhoni is a very big player and I don’t like saying it out loud. But I didn’t like what I saw today.”